A couple who had to cancel their dream destination wedding twice last year reveal they’ve had to postpone their nuptials for a third time due to the coronavirus travel restrictions.

Joanna Phillips, 45, and Jonathan Metcalf, 53, from Huncote, Leicestershire, have been together for seven years and were due to marry in a ‘proper Elvis wedding’ in Las Vegas in June 2019.

However the couple were forced to put their plans on hold when Joanna was diagnosed with cancer in March. 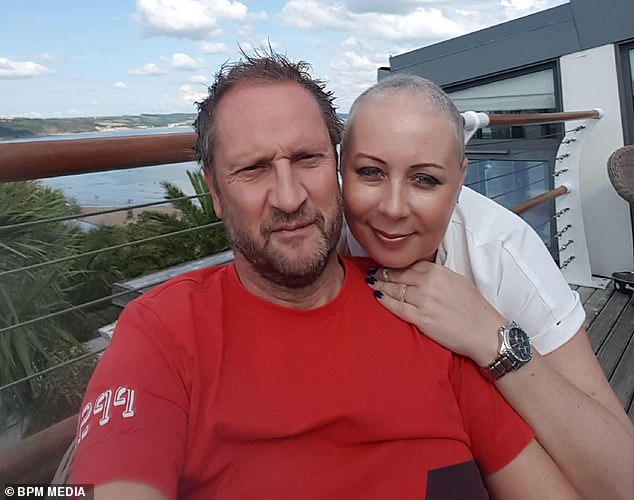 Joanna Phillips, 45, and Jonathan Metcalf, 53, from Huncote, Leicestershire, were due to wed in Las Vegas in June 2019 but had to rearrange for June 2020 after Joanna was diagnosed with breast cancer. Pictured, the couple after Joanna lost her hair as a result of chemotherapy

Joanna said: ‘We were due to get married in June last year, but in March I was diagnosed with breast cancer. It happened so close to the day, so we had to postpone the wedding and the stag and hen dos as well.’

The bride-to-be started chemotherapy immediately and had lost all of her hair by the following month.

Despite the difficult situation, the couple were determined to wed and rearranged the ceremony for June 2020.

But the couple faced another blow when Thomas Cook, the travel company they had booked with, went into administration in September last year.

Joanna continued: ‘We’ve only just got our money back from Thomas Cook and after all that, Vegas just didn’t seem right, so we rearranged again and decided to book for May 28 this year in the Dominican Republic.’ 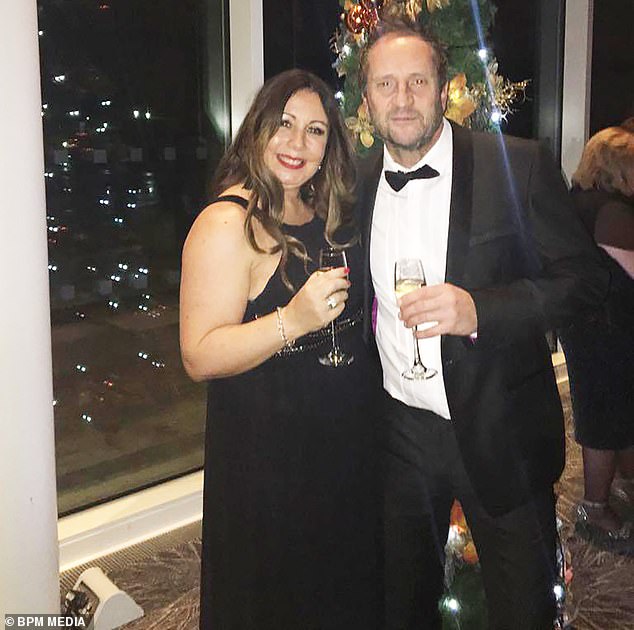 The couple, pictured together, rearranged for June 2020 but faced another blow when Thomas Cook, the travel company they had booked with, went into administration last year

Now the couple are being forced to put their plans once more after global travel restrictions means they are no longer able to travel to the Dominican Republic.

The change of plans also impacts the 20 guests who had planned to travel for the wedding, which has cost Joanna and Jonathan £30,000.

The bride-to-be said the ongoing uncertainty surrounding the spread of COVID-19 means they do not know when they will be able to hold the wedding instead.

She said: ‘We don’t know if this is all going to be OK again by October or November and the prices have already been listed for next year, and would cost us £10,000 more, so I don’t know where we’d be able to have it either.’

However they cannot cancel the wedding completely, as the insurance will not cover it. 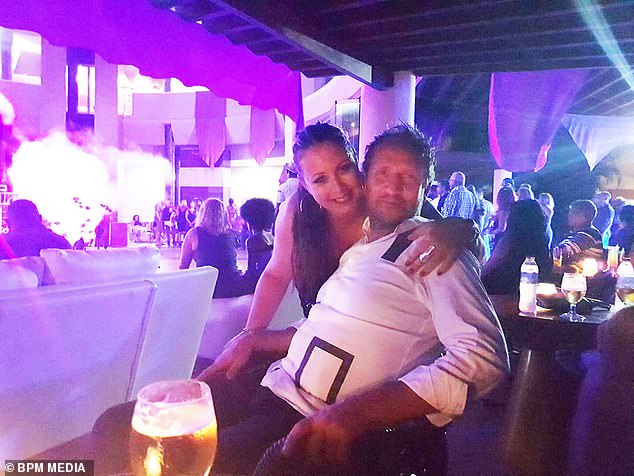 Joanna and Jonathan, pictured together, had rearranged their wedding for the Dominican Republic in May this year but have been forced to put plans on hold due to the coronavirus

The couple were also due to have a reception in the UK later this year, for 250 friends and family, which now has to be rearranged after the Government banned all weddings as part of its far-reaching lockdown restrictions.

But Joanna, who is in self-isolation for 12 weeks due to being in a high risk group because of her continued at-home chemotherapy treatment, explained they are still looking on the bright side.

She said: ‘You couldn’t make it up. We’ve still got a smile on our faces. We are staying upbeat about this because when you are dealing with cancer, it’s all irrelevant. We just want to have a nice celebration when this is all over.

‘We did have a day where we considered whether or not it was all worth it, but we know more than ever that this is what we want. It’s made us stronger.

‘I just want to get that wedding dress on and get down the aisle. I’ve waited 45 years for this, and I am going to make sure it happens.’

Tags: cancel, Couple, had, have, thei, to
You may also like
Recent Posts