Usually, when postman Mohammed Tehseen takes parcels to the 1095 homes that he delivers to in Essendon North, about a quarter of the residents aren’t there.

If a resident isn't home, he drops the package back at the post office for them to pick up later. “Yesterday I had 97 parcels and I delivered 96,” said Mr Tehseen, a postie for seven years. 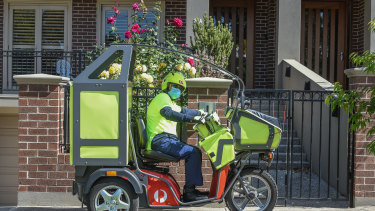 He started on a bicycle, then moved to a motorbike. Now, he does his rounds on an electric delivery vehicle. Luckily for us, because the vehicles can carry a small mountain of parcels.

“The last two weeks, I've delivered so many more parcels than before. Today I delivered three to the one lady and she said she had 15 more coming,” Mr Tehseen said. 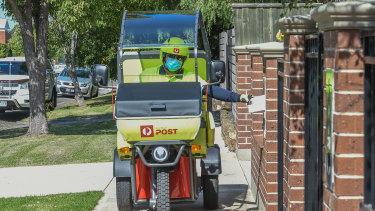 Mohammed Tehseen started on a bike but now uses an electric vehicle, which can carry more parcels, to deliver the mail.Credit:Justin McManus

Even with a small number of postal outlets closing because their older franchisees considered themselves vulnerable to the coronavirus, technology and stationery product sales rose almost 100 per cent.

Posties normally sort their mail together each morning before going out alone to deliver it. In order to create better social distancing, they are now staggering start times, meaning fewer bodies in delivery centres and leaving posties like Mr Tehseen feeling somewhat safer from the virus.

“Before, our sorting inside was very close to each other," he said. "Now we have two metres between us.”

They also carry sanitiser, although the Communications Workers Union which represents them has concerns there isn't enough to keep the hands of Australia Post's 70,000-strong workforce virus-free.

Mr Tehseen said there was no sign at his Airport West delivery centre of anyone being affected yet. “There 106 posties at our centre and no-one has come down sick,” he said.

He said posties had strict instructions about how to open gates if they could: with their butts. “If there is no lock on a gate, they’ve said to open with your backside. But sometimes the doors have handles to go into the yard – and that’s when we use sanitiser,” he said.

Posties are also not asking for signatures on items delivered to front doors, and have been reassured there is little evidence coronavirus can spread via transference on letters or parcels.

Mr Lazaro said posties were “really feeling quite stressed at the moment”, especially those in Australia Post’s retail outlets. “But they’re doing the best they can as an essential service – delivering a social service to make sure our communities keep on ticking over."