As part of the Complications, Simplified series explaining the complex mechanisms that add functionality – or complications – to mechanical watches, HYPEBEAST looks at how the Perpetual Calendar kept track of our calendar centuries before the arrival of computers.

Introduced by Pope Gregory XIII in 1582 and today used in all but five countries (Iran, Afghanistan, Ethiopia, Eritrea and Nepal, in case you were wondering) around the world, the Gregorian calendar has done a fairly decent job of keeping the world on the same page in the four centuries since it was introduced. But it’s by no means perfect.

A calendar year includes months with 28, 30 and 31 days, while the 365-day calendar is around six hours short of a full orbit around the Sun, which makes it necessary to insert an extra day into February once every four years as a leap year.

Combined, these factors make keeping track of the date mechanically a complicated task. Watches with a simple date indication are a completely unsatisfactory solution by any standard, using a single 31-day date wheel, which then requires manual adjustment at the end of each of the five months every year that don’t have 31 days.

A watch featuring a perpetual calendar mechanism – known in Swiss French as a Quantième Perpétuel or QP – not only takes into account the different lengths of months, but also the four-year cycle of the leap year meaning, that if it were kept running, it would display the correct date until 2100, a year which should be a leap year but isn’t due to one of the many quirks of the Gregorian calendar.

In total, a perpetual calendar needs to be able to mechanically ‘store’ and display a continuous sequence of 1,461 individual days before starting all over again.

While a perpetual calendar must keep track of the date until 2100, there are no set rules about how much of that information it needs to display. IWC’s Calibre 52615 displays day, date, month, year and moonphase, while H. Moser & Cie’s pared back HMC 800 movement keeps it simple with just month, date and leap year indicator.

Patek Philippe introduced the less complicated, but more affordable annual calendar complication in 1996, which needs a single annual adjustment at the end of February.

Of course, no-one really needs a mechanical perpetual calendar today with digital devices more than capable of keeping track of the date, not to mention the fact that no-one is likely to keep a watch running constantly for the next 79 years. However, the mechanics behind the complication is still appreciated by collectors and the perpetual calendar remains a serious statement of intent in any watchmaker’s collection.

The perpetual calendar was invented in 1762 by London-based watchmaker Thomas Mudge. Mudge not only invented the perpetual calendar but, eight years earlier, also devised the lever escapement, which is still used inside virtually all mechanical watches today, making Mudge a strong candidate for the most influential watchmaker of all time. Mudge’s first perpetual calendar sold at Sotheby’s in 2016 for £62,500 GBP (approximately $85,500 USD) and can now be seen in the British Museum.

Philippe’s system relies on a number of cam wheels to store the various data sets, with each influenced by the other through a central ‘grand lever’ that moves at midnight, interacting with the various wheels.

The most important of the wheels is known as the ‘cam of 48’ or ‘four year wheel,’, which completes one rotation every four years and features 48 notches of varying depths, one for each month, with the deepest representing 28-day months and the most shallow, months with 31 days.

These varying depths found around the cam of 48 serve to control the movement of the grand lever, ‘informing’ the system of the length of the month. The pivoting grand lever then advances the date wheel one day at a time, while a snail-shaped cam sitting above it dictates when the system moves on to the next month. In months shorter than 31 days that also means advancing through up to three superfluous days.

Any instant jumps in watchmaking, whether jumping hours or date changes, are usually achieved using these unidirectional snail or drop cams. Fingers or feelers track along the outside of the shape, building towards the widest point before immediately falling off to the lowest point, allowing the entire cam to be rotated, causing the advancement from one month to the next.

Philippe’s complex system is an incredibly elegant piece of engineering and is still the approach used today by the likes of Patek Philippe and A. Lange & Söhne, as it lends itself to the highest levels of decorative finishes. But it is not without its drawbacks as it relies on unidirectional travel within the movement, making it laborious to adjust via correctors and prone to jamming if adjusted while the date is changing.

The complication first made the leap to wristwatches in 1925 when Patek Philippe took an unsold pendant watch perpetual calendar movement from 1898 and cased it up as a yellow gold wristwatch. The 34.4mm Ref. 97975 is on display at the Patek Philippe Museum in Geneva.

The next big advancement for the complication would come in 1985 as IWC was being rebuilt after the Quartz Crisis by visionary CEO Günter Blümlein, who tapped into the watchmaking expertise of Kurt Klaus, at that time already a 28-year veteran of the brand.

Klaus famously collected the final year rings from IWC’s supplier the day before the opening of the Baselworld trade show in 1985, drove them to the show and installed them in three prototype watches, completing his work 30 minutes before the doors opened.

This was just the first in a series of perpetual calendar upgrades, the next following in 1996 when watchmaking genius Ludwig Oeschlin developed the Perpetual Ludwig for Ulysse Nardin, which can be adjusted in both directions – again using the crown – even while the date is advancing.

H. Moser & Cie called in the equally gifted Andreas Strehler to develop its perpetual calendar movement, going one better. Not only are Moser’s QP movements adjustable in both directions but, unlike the Ulysse Nardin, they advance from 28 to one instantly, a development Moser calls the Flash Calendar.

While these innovations had taken care of the perpetual calendar’s tiresome control interface, the complication still had a poor reputation for reliability when faced with “over-enthusiastic owners.” 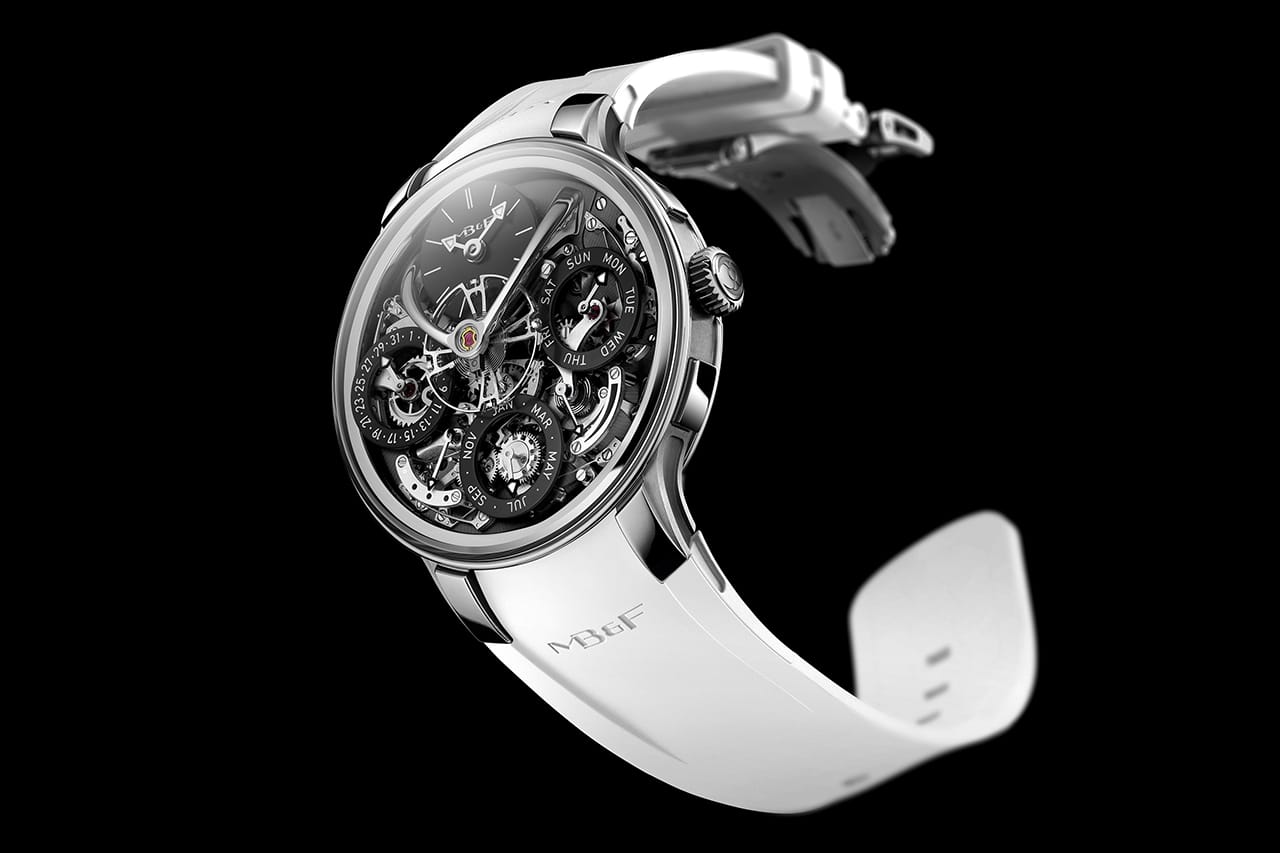 When MB&F tasked Irish watchmaker Stephen McDonnell with creating a foolproof QP movement for its LM Perpetual in 2015, they described the traditional ‘grand levier’ mechanism behind the complication as a “boomerang,” a watch that would often return to the factory for repairs soon after it had left.

McDonnell added a fail safe mechanism to the movement, deactivating its pushers during calendar changes.

The movement’s main development though was its “master controller,” a 20-component mechanical processor which set the base rate for each month at 28 days, rather than the traditional 31. In months with more than 28 days, extra days were added by the processor on the 25th of each month, while the date pointer reverted to the 1st in a retrograde manner rather than advancing forward.

While no-one is relying on six-figure perpetual calendars for the date anymore, watchmakers continue to develop the complication, meaning the QP has never been easier to use – or perhaps more importantly, more difficult to break – than it is today.
Source: Read Full Article