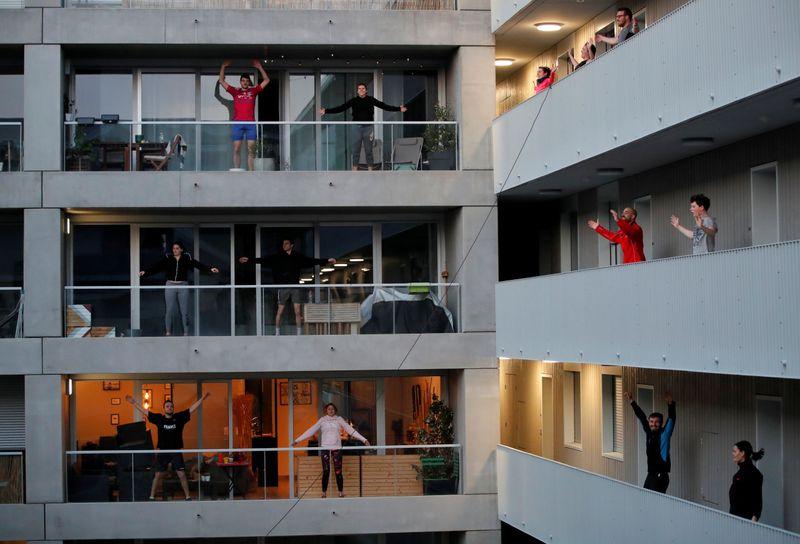 NANTES, France (Reuters) – As dusk fell over Nantes in western France, dozens of residents of an apartment block came out onto their balconies for a half-hour fitness session to beat the inertia of life under lockdown while the coronavirus sweeps across the country.

Music pumped out as the group put itself through a routine of star jumps, squats and jogging on the spot. The workout caught on after Pierre Planchenaud began exercising alone. Before long, his neighbors wanted to join in.

“It meant everyone could relax after a day where you stay shut up indoors or in isolation,” said Planchenaud, who works in advertising. “It enables people to have a bit of freedom and take their minds off things.”

France has been under virtual lockdown since March 17 and on Friday Prime Minister Edouard Philippe said the unprecedented peacetime restrictions on public life would remain in place until at least April 15. The outbreak has killed about 2,000 people in France and sickened 33,000 others, according to official numbers.

Public gatherings are banned, schools and universities are closed and all non-essential businesses have shut down, with people allowed out of their homes only to buy groceries, carry out essential work, exercise or seek medical care.

Stress caused by fear of the disease is compounded by isolation, mental health experts say, and the French government has reported a marked increase in domestic violence during the lockdown.

“We started last night and we’re having a great time with the family. It’s cool,” said firefighter resident Guillaume Ricquier.

Planchenaud leads the workout from a central courtyard, with the makeshift class wrapping up just in time to join others nationwide clapping and cheering in support of the healthcare workers battling to save the lives of coronavirus sufferers.

“It brings a new energy,” said osteopath Laura Martinez. “We said last night it needs to keep going after the lockdown.”

Tags: Coronavirus, f, FRANCE, health, Us
You may also like
Recent Posts