Australia's Deputy Chief Medical Officer says the country is "probably on the cusp" of forcing the coronavirus infection rate down to a point where the virus could die out, as case numbers continue slow in Victoria.

The daily growth rate as a percentage of total cases has fallen from about 20 per cent in late March, to an average of 1.8 per cent over the past week. On Friday, a growth rate of 1 per cent was recorded. 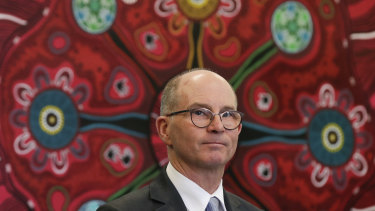 Deputy Chief Medical Officer Paul Kelly said the overseas infection rate for COVID-19 was "disturbing", with international results showing infected people can pass it on to as many as five others. But he said Australia's successful social distancing measures were helping drive the rate closer to a further one or two infections per person.

"Ideally, where you want to be is below one. So less than one other person being infected, after a person themselves had the infection," he told reporters in Canberra.

"Once you get to that point, the virus dies out or the epidemic dies out. At the moment, we're probably on the cusp of that in Australia.

"Whether that's where we're going to be in several weeks' or months' time remains to be seen. But at the moment, we're certainly not anywhere near five."

With fewer international travellers arriving due to flight restrictions, Australia's testing regime has expanded to workers in public-facing occupations and those aged over 65 in the hope of identifying cases of local transmission not linked to overseas travellers.

Thousands of tests are being conducted every day, and 65,000 tests have been completed in total, with about 20,000 of these happening in April.

The amount of cases acquired from community transmission as a proportion of total cases has increased.

There are now 116 cases of local transmission in Victoria, six more than on Thursday. There were only 32 of these cases at the start of the month, but Victoria's Chief Health Officer Brett Sutton has consistently warned these cases are likely to continue to rise as more testing is completed.

Another 13 people were diagnosed with coronavirus in Victoria ahead of the government's daily update on Friday morning, taking the statewide total to 1241.

Thirteen people have now died from COVID-19 across the state. The latest victim was an 80-year-old man who died in hospital.

There are 43 people in the state's hospitals suffering from the virus, including 13 patients in intensive care, while 926 people have recovered.

The total number of cases includes 650 men and 591 women, ranging in age from babies to people in their early 90s.

Of the 1241 cases, 1001 are in Melbourne and 229 are in the regions. Several other cases remain under investigation.

The area around Melbourne's CBD has 55 cases, a similar amount to the Mornington Peninsula and the Geelong areas.

Tags: Australia, curbing, cusp', of, on
You may also like
Recent Posts