Civil rights attorney Brian Claypool argues Travis Scott should not be the target of legal action following deaths at the music festival.

Live Nation Entertainment Inc. has again come under scrutiny after a Travis Scott concert on Nov. 5 at the Astroworld music festival in Houston left at least eight people dead.

Authorities have said 50,000 people attended the event in Houston, Texas. Over 300 people were treated at a field hospital on-site at NRG Park, and at least 13 were later hospitalized after a crowd surge. The eight confirmed dead ranged in age from 14 to 27.

"Heartbroken for those lost and impacted at Astroworld tonight," Live Nation, an entertainment company that organized the event at Astroworld, said in a Nov. 6 tweet. "We will continue to provide as much information and assistance as possible to the local authorities as they investigate the situation."

In a Nov. 8 joint update, Live Nation, Astroworld and Texas-based nonprofit ScoreMore, which owns the Astroworld venue, said the three entities behind the concert have been cooperating with law enforcement to assist in their investigation.

"Our staff has met with local authorities to provide information, and we have also provided them with all footage from our CCTV cameras," the companies said in the statement, adding that customers will be given full refunds for their tickets and those injured will have medical expenses covered.

Although the investigations have just begun, more than a dozen lawsuits have been filed so far against Scott, Live Nation and ScoreMore. The complaints allege that organizers failed to take simple crowd-control steps, to staff properly and to act on early signs of trouble at the sold-out concert.

Experts expect dozens of lawsuits seeking damages that could climb into hundreds of millions of dollars. 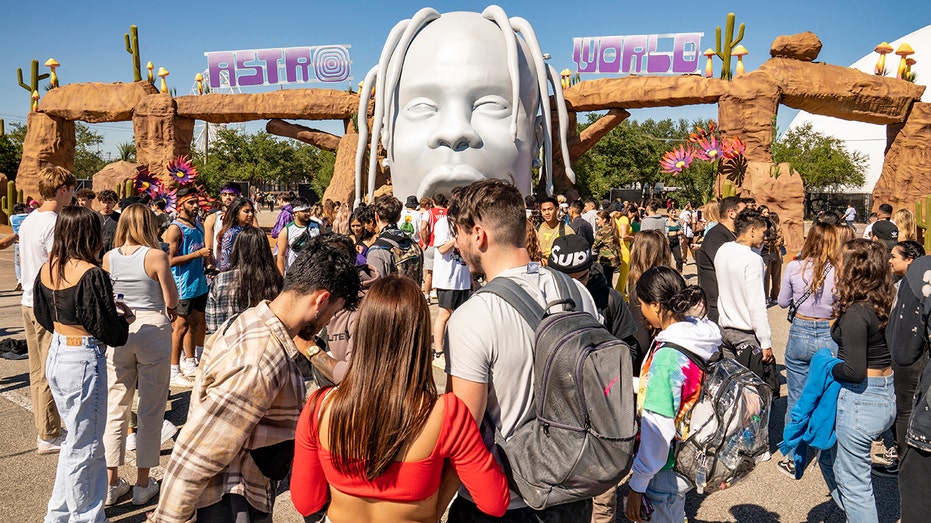 Fans during 2021 Astroworld Festival at NRG Park on Nov. 5, 2021, in Houston, Texas. (Photo by Erika Goldring/WireImage)

But it's not the first time Live Nation has faced serious legal challenges.

The most significant lawsuit against the company in recent history came in 2018 after shooter Stephen Paddock opened fire at the popular Route 91 Harvest musical festival in Las Vegas, killing 58 people.

Five months after the shooting, the company still hadn't fully refunded tickets to all those who attended the festival and ended up witnessing the deadliest mass shooting in American history.

"Live Nation will do everything in our power to support the victims and their families through the aftermath of this horrendous event and extends our deepest gratitude to the heroic first responders who helped save as many lives as possible," the company said in a statement days after the tragedy.

Lawyers for the victims filed a class-action lawsuit against Live Nation at the time in an effort to collect full refunds for all 22,000 attendees of the three-day country music festival in October 2018. 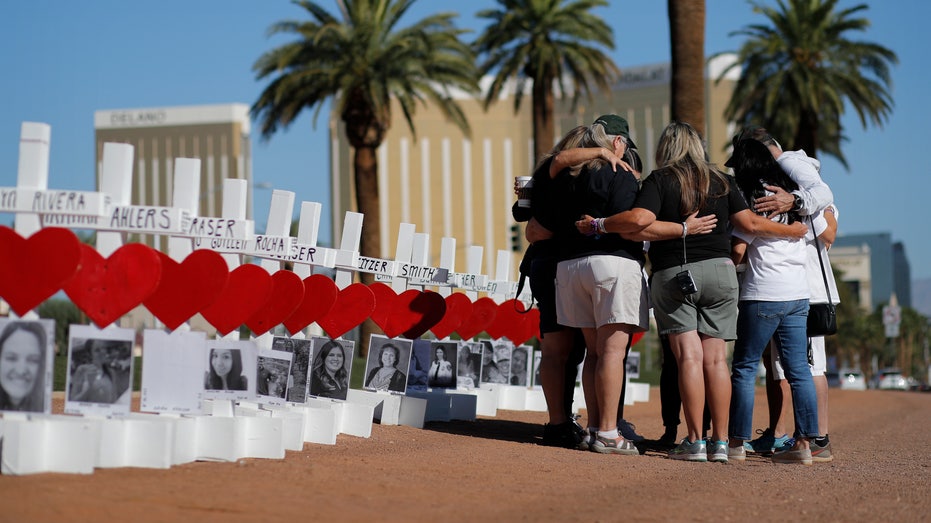 People pray at a makeshift memorial for shooting victims in Las Vegas, on the anniversary of the mass shooting two years earlier. (AP Photo/John Locher, File)

A year later in 2019, Journey guitarist Neal Schon filed a lawsuit against Live Nation after claiming that his wife was violently assaulted at a concert by one of its hired security guards.

Separately in 2019, Live Nation received a $5,000 fine after an employee said he was struck in the head by a 6-foot steel post that "tipped over" while he was walking near a staging area in 2018, lacerating and bruising his head, according to Occupational Safety and Health Administration records.

In 2020, tour manager and sound engineer Jared Jackson sued Live Nation and others for his injuries after claiming that during a 2017 performance, he fell about 12 feet "through an eight-foot by eight-foot gap in the stage, which was covered with decorative camouflage netting" despite his "prior warnings about the unsafe stage conditions."

Jackson alleged that the stage "was not properly marked or set-up at the time of the performance." The plaintiff also suffered "severe injuries to his legs and body, requiring extraction by paramedics," according to the lawsuit.

The Houston tragedy comes nearly two years after the COVID-19 pandemic shut down group events, including concerts. In August 2020, the publicly-traded company reported a $588.1 million loss in its second quarter. Revenue for three months – ending in June 30 – totaled only $74.1 million, marking a shocking 97% drop from the same time in 2019.

About a year later, during the summer of 2021, Live Nation began promoting more concerts and revenue picked back up.

The company's stock has soared as fans rush to more concerts and festivals now that many pandemic restrictions have been lifted. The company has declined to comment on what went wrong in Houston, but issued a statement Monday that it is helping police with a criminal investigation and "will address all legal matters at the appropriate time."

The company reported it held $4.6 billion in cash as of September. Its stock fell less than 1% Tuesday afternoon after plunging more than 5% a day earlier.

Tags: Astroworld, Highlights, Tragedy
You may also like
Recent Posts