Letting off steam: Astronomers spot a new kind of asteroid with a comet-like tail orbiting the sun at the same distance as Jupiter

A new kind of space rock that is a crossover between an asteroid and a comet – called an active asteroid – has been spotted sharing an orbit with Jupiter.

Called 2019 LD2, the unique stellar object was found in a swarm of asteroids known as the Jupiter Trojans and is the first of its kind seen spewing out gas like a comet.

Active asteroids with a comet like tail have been found before, although University of Hawaiʻi astronomers  who found 2019 LDR say they are very rare.

It was found last year by astronomers using the Asteroid Terrestrial-Impact Last Alert System (ATLAS) and showed up as a faint new signal in the Trojan group.

The space rock was spotted by astronomers using the ATLAS system. This ATLAS image of 2019 LD2 (indicated by two red lines) is almost lost in crowded field of stars

Follow up observations of the asteroid in June 2019 allowed astronomers to discover its comet like properties – then in April 2020 researchers found it still had a tail.

There are thousands of asteroids in the Jupiter Trojan category and are split into two groups – those in front of Jupiter where 2019 LD2 is and others trailing behind it.

There are two leading theories that could explain why LD2 is active and in the Jupiter Trojan category.

Astronomers believe the majority of asteroids in the Jupiter Trojan group were swept up four billion years ago – when the planets were just reaching their current spots.

They say that if they have been there that long then any surface ice should have escaped a long time ago.

‘We have believed for decades that Trojan asteroids should have large amounts of ice beneath their surfaces, but never had any evidence until now,’ astronomer Alan Fitzsimmons of Queen’s University Belfast in Ireland told Science Alert.

‘ATLAS has shown that the predictions of their icy nature may well be correct.’

It is possible that LD2 collided with another asteroid, dislodging material and exposing the previously sealed ice – this would cause the tail and gas leak. 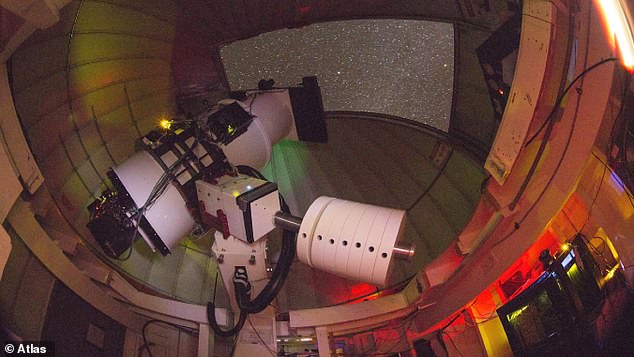 The other theory is that it was a stray asteroid that was recently captured by Jupiter from further out in the solar system where it is cold enough for ice to remain on the surface – and so leak slowly into space and create a tail.

NASA is launching a spacecraft next year to visit and study the Jupiter Trojan asteroids – although LD2 isn’t on the list of asteroids it plans to visit.

For now we have ATLAS and other telescopes to study the rock.

‘Even though the ATLAS system is designed to search for dangerous asteroids, ATLAS sees other rare phenomena in our solar system and beyond while scanning the sky,” said ATLAS project principal investigator Larry Denneau.

“It’s a real bonus for ATLAS to make these kinds of discoveries.”

Explained: The difference between an asteroid, meteorite and other space rocks

An asteroid is a large chunk of rock left over from collisions or the early solar system. Most are located between Mars and Jupiter in the Main Belt.

A comet is a rock covered in ice, methane and other compounds. Their orbits take them much further out of the solar system.

A meteor is what astronomers call a flash of light in the atmosphere when debris burns up.

This debris itself is known as a meteoroid. Most are so small they are vapourised in the atmosphere.

If any of this meteoroid makes it to Earth, it is called a meteorite.

Meteors, meteoroids and meteorites normally originate from asteroids and comets.

For example, if Earth passes through the tail of a comet, much of the debris burns up in the atmosphere, forming a meteor shower.

Tags: a, Astronomers, Kind, new, of, spot
You may also like
Recent Posts