Home
Celebrities
What Happened at Ruby Ridge, the FBI Incident That Preceded 'Waco'

The miniseries Waco, now streaming on Netflix, tells the true, cautionary tale of the 1993 51-day standoff and siege between the FBI/ATF and the Branch Davidians, a religious cult led by David Koresh in Waco, Texas. The incident ended in a tragic fire that killed 76 of the residents on the Mount Carmel compound, leading to a decades-long discussion of how the government mishandled the delicate situation.

About halfway through the first episode of the miniseries, the show takes viewers to an incident involving Gary Noesner a year earlier. Although seemingly unimportant to the rest of the miniseries, it does set off events that lead to the FBI’s involvement with the Branch Davidians.

Here’s a little insight into what happened in the 1992 incident. 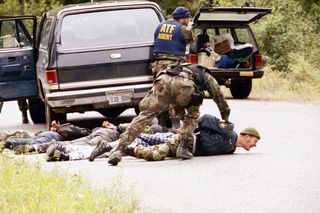 Randy Weaver, a former U.S. Army combat engineer, moved his family to northern Idaho in the 1980s and attended meetings of the Aryan Nations, a white supremacist group. While at one of the meetings, he became friendly with an informant of the ATF who later bought two illegal sawed-off shotguns from Weaver. When Weaver refused to help the ATF and inform them who sold him the weapons, he was arrested in January 1991.

In August 1992, an 11-day standoff occurred between the Weaver family and the ATF

The situation escalated when the family’s dog noticed government agents surveilling the property, leading Weaver, his son, and a family friend to investigate (and with weapons in hand). Soon, a shootout took place and both Weaver’s son and a U.S. marshal were killed.


The next day, an FBI agent shot Weaver in the arm and killed Weaver’s wife while she held the couple’s infant daughter. According to a 2017 report from ABC News, more than 200 members of federal, state, and local officers were involved in the incident.

Weaver and a family friend eventually turned themselves in to federal officers and were charged with various crimes, including murder, assault, and conspiracy. They were acquitted of all charges, apart from Weaver failing to show up to court.

According to ABC News, the government gave the Weaver family a settlement in 1995 in a wrongful death suit that was settled out of court. Weaver was given $100,000 while his three daughters received $1 million each.

Tags: At, happened, Ridge, Ruby, t, What
You may also like
Recent Posts