Kate Middleton and Prince William have been married for 10 years, and that means she’s spent a lot of time with William’s grandmother, Queen Elizabeth II.

Some would think getting along with a royal grandmother-in-law might be difficult, but it seems like the opposite for Kate and the queen. “Their relationship is stronger than ever,” according to a January report from Best Life. Kate was reportedly “the family’s secret weapon” in 2020 as the coronavirus pandemic forced Britain into a lockdown. Kate’s efforts didn’t go unnoticed: “Her Majesty has always been fond of Catherine, but the queen was very pleased to see how the duchess rose to the occasion so brilliantly during lockdown and took on some wonderful initiatives,” the source said.

Kate even has a direct phone line to check in with the queen, according to OK (via The Observer). Royal expert Duncan Larcombe told the outlet that Kate “strikes that balance between bowing to her as head of the royal family in public but being able to check in with her as the great-grandmother to her children.”

Kate Middleton's new role takes her on the high seas 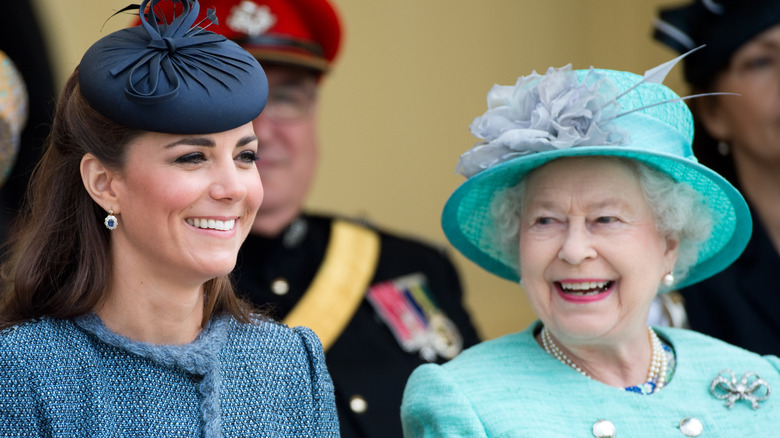 Kate Middleton is now the sponsor of HMS Glasgow, the newest ship in the Royal Navy.

According to Kate’s Kensington Palace office (via People), this new job means she will have a “strong and enduring personal connection to the vessel and her crew, often supporting milestones, events and deployments.” Her husband, Prince WIlliam announced her new gig and he seemed quite proud of his wife. “Today, I’m very pleased to announce that my family’s connection with Type 26 will endure for many years to come. Her Majesty the Queen has approved the appointment of my wife Catherine as Sponsor of the superb ship we see taking shape outside — HMS Glasgow. I know that Catherine will be delighted to join you here in Glasgow for the naming ceremony in due course.”

He also touched on his late grandfather, Prince Philip, and added, “My family’s affection for the Royal Navy is well known, and as I saw the work taking place here today, I was thinking of my grandfather, the Duke of Edinburgh. He would have been fascinated and very excited to see such advances in skills and technology being put into practice.” As royal watchers know, Prince Philip’s time in the Royal Navy made an enormous impact on his life. Not to mention that the Daily Mail reports that Kate is already “stepping into Prince Philip’s role as the glue that holds” the royals together.

Tags: about, Kate, Middleton, The, truth
You may also like
Recent Posts