Dwayne “The Rock” Johnson is one of, if not the biggest movie stars in the world. The word “biggest” is always going to be a but subjective, but, well, physically there aren’t many other people who can stake a claim, and he’s been the highest-paid guy in the business for now a few years running. But while he’s worked his ass off to get to where he is, as he details in Young Rock, the superstar actor, wrestler, and former University of Miami defensive lineman wasn’t always unrivaled in his devotion. The 48-year-old star took to Instagram to share a clip from Young Rock—the NBC scripted comedy that recounts his younger days—where he meets one person he found that outworked him: future NFL Hall-of-Famer Ray Lewis.

“Thru blood, sweat and iron-we bonded like brothers immediately and we LOVED pushing the hell outta each other in the weight room,” he wrote about Lewis, who was a true freshman in the moment the show depicts, in his caption. “Push each other beyond our pain thresholds to chase greatness.” 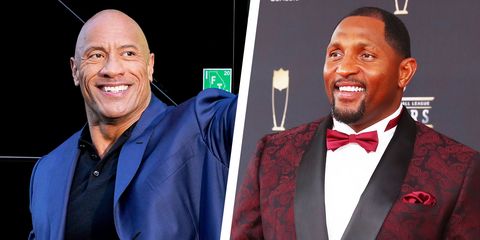 In the clip shared, college-aged Rock (Uli Latukefu) arrives at the University of Miami weight room for his usual super-early-morning (5 a.m.) workout—only to be beaten to the punch by who he soon learns is Ray Lewis, a freshman linebacker. We see the two form an immediate bond—Lewis calls them the “break of dawn boys”—and then see a quick cut to Lewis dominating on the field, which Johnson would elaborate upon.

Tags: Rock, shares, The, Young
You may also like
Recent Posts