Domhnall Gleeson (pronounced “dough-null,” though your phone may want to correct the Irish spelling to “downhill,” and Gleeson, believe him, has heard that one before)—Domhnall—was supposed to spend St. Patrick’s Day in Belfast, filming with his brother, Brian, (pronounced, as you’d expect: Brian). Then, on the eve of his home country’s largest holiday and in the wake of the coronavirus, the Irish government called for all pubs and gatherings to shut down. With parades stopped and the holiday canceled, Gleeson returned home to Dublin and made jelly.

“You get a green jelly—or—Americans don’t call it jelly, what do you call it—Jell-O?” Gleeson starts, excitedly sprinting through his sentences over the phone. “So green Jell-O, orange Jell-O, and then vanilla ice cream—you put the vanilla in the middle, so you have the Irish flag—so, I had the Irish flag dessert, it was very exciting, and it was delicious. But! … ” he pauses, before taking another lap: “I would say very vehemently—we call it jelly, you just need to know that, it’s important.”

Gleeson is still in Dublin, still inside, allowed out only for post-jelly exercise and groceries, and nothing farther than two kilometers from his house. Everyone on the block is inside, too, perhaps even watching Gleeson on the telly, the actor officially done now with all things Star Wars (his fear of spoiling his character, General Hux, finally abated), and starring in this spring’s most needed escapist dramedy, Run, about two former lovers on an awkward, then sexy, then thrilling train ride. It’s the perfect show for a time of pure sedentariness.

Gleeson himself hasn’t moved much since he was a kid, preferring to stay close to home in Dublin, even after film success. He grew up here, making Irish flag dessert on St. Patrick’s Day and watching the parades. “And it was never the big ones,” he explains, still verbally sprinting. “It was always the small local ones, which were hilarious, like, where the person who lives locally just happens to own a Mercedes—like that’s one of the floats!—and then they had lollipops, I remember somebody handing out lollipops—in a Mercedes—and I’ve never felt as much like a peasant in my life.”

Gleeson, though, comes from a family of thespians. His father is the celebrated actor Brendan Gleeson. Perhaps because of that proximity, Gleeson The Younger went to school for writing and directing. But he’s since followed his family trade onto the stage and then onto the screen, becoming successful enough on his own not to be held in the possessive: Brendan Gleeson’s son. In fact, it may have taken viewers this side of the pond years to even connect the two. 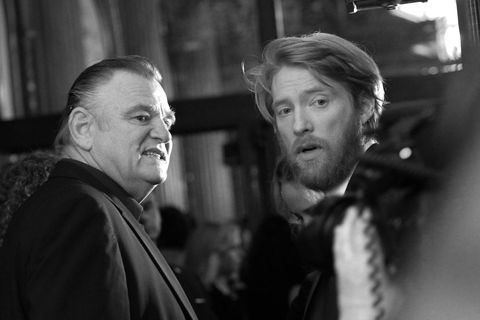 Over here, Gleeson is likely most recognizable from a pair of franchises: first, with an English accent in the Harry Potter world as Bill Weasley. (Gleeson The Elder plays Mad Eye Moody, which makes the death scene in Harry Potter and the Deathly Hallows Part 1 all the more tender.) And more recently as British-speaking General Hux, the Himmler-like officer of Star Wars’ Nazi-like First Order.

Which is all to say American audiences probably haven’t seen Gleeson play anything non-serious—or with his own native accent. That earnest Brit/American Gleeson, nevertheless, has been formidable recently. From Unbroken (in which Gleeson lost so much weight his contacts stopped fitting into his eyes), to Alex Garland’s Ex Machina (where he disappears into the self-mutilating role of an American tech programmer), to The Revenant (as a war-ragged captain holding down the American frontier), Gleeson has always been the standout supporting actor, like a Tom Hardy or a Paul Dano: every scene he’s in, he just makes better. (In The Revenant, he and Hardy are together a team to behold.)

“I’m really proud of the work I’ve been allowed to be involved in over the last few years,” Gleeson says, very seriously. “I’ve had a really good run of things. But in a lot of it, the emphasis has not been on being funny.”

And this, the whole being funny thing, Gleeson also excels at. You may have seen it, at times, hidden beneath the drama; even with stern General Hux, there’s a grin wanting always to crack, and as the trilogy progressed, directors let it. Outtakes from the Star Wars filming often find Gleeson, post-line mistake, breaking British and loudly cursing in his sprinting Irish—“ah fuck, I fucked it up, I fucked it up, fucked it up!”—as the camera crew erupts, laughing. And his no-smile, very serious, very adult, very grown-up role in Goodbye Christopher Robin, was broken, apparently, by Gleeson performing armpit farts between takes and Margot Robbie roaring.

Gleeson in A Futile and Stupid Gesture, The Revenant, and Anna Karenina.
IMDB

Gleeson said he just loved Jones’s script. (His accent makes the word sound like loave, which he says often and always sincerely.) “It wasn’t just a comedy—there’s all these other dramas underneath it about love and lost opportunities, your first love, you know, an old love coming back—I just loved all that stuff, it really made my heart pound when I read it.”

The actor has played romantic before, in the very romantic About Time. Though probably the last time we saw Gleeson in a TV “romance” it was on Black Mirror, where his dead body was synthetically grown and reanimated in an English bathtub. Run would be slightly lighter than Black Mirror (and less sappy than About Time). But it would also be a much bigger commitment, a longer filming time, and a character made of flesh and blood and not silicon or whatever the fuck Bathtub Gleeson was. (Still one of Black Mirror’s best episodes to date.)

So, for Run, Gleeson decided to use his own accent. It wasn’t a trivial decision. “The Irish accent, yeah I find it tricky, actually, in a funny sort of a way. I didn’t always love doing my own accent,” Gleeson admits. “Because doing an accent is an amazing way to study text, like if you’re doing an accent, you need to drill those lines into your head so hard it makes you think about what the words mean, and it also puts you in a certain headspace—it changes you.” With the accent, Run’s Billy became, for Gleeson, a little “worryingly close to home.” Of course, all by Gleeson’s own doing. He even wore his own clothes.

“I had spent more money on an item of clothing than I ever had before, on this hoodie, which would be in the [show]. I had seen it in Los Angeles in this store, and I was like that’s the coolest thing I’ve ever seen.” It’s dark with colored stripes horizontally across the front, and Gleeson had a “funny feeling” it might suit his character. So he packed it before heading to Toronto to film. Jones loved it. And then Gleeson added another piece of Gleeson attire. “I had his Burberry coat, which I adored and I was like, ‘fuck, I think [Billy] should be wearing that too.’ I just love that coat.” And thus it was so.

Though the word is trite, there really is something disarmingly “authentic” about Gleeson, something one senses no amount of fame or type of role would ever really change. 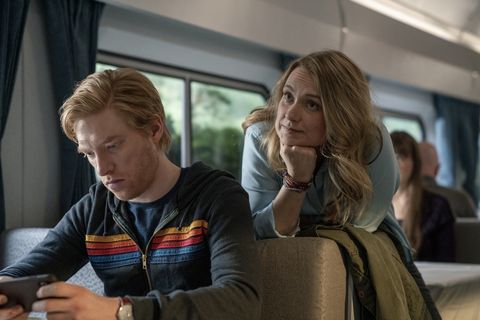 Oddly enough, Gleeson’s career began with dark comedy on a train. He played a minor part opposite his father in Irish-British playwright and director Martin McDonaugh’s Oscar-winning short film, Six Shooter. Gleeson The Younger, then 21, hair matted in his face, insolently sells Gleeson The Elder alcohol from a trolley. (In Run, Gleeson The Younger is the one doing the train drinking.) The job, which later led to a role in McDonagh’s Tony-winning play, The Lieutenant of Inishmore, set Gleeson on his way. “I owe everything to Martin,” he says. “If I hadn’t read his work, I don’t think I would be an actor.”

Certainly not an actor to be recognized apart from his famous last name. And recognition, Gleeson says, was something that motivated him, validated what he was doing. “The first time somebody recognizes you from work, or the first time somebody comes up to you after a play and says, ‘Oh, you’re the guy from that play, well done,’ it’s totally thrilling, totally thrilling, and there’s no point pretending otherwise.” Though, Gleeson concedes his level of fame makes those instances less bothersome. He’s stopped by Harry Potter fans and kids who love both Peter Rabbit (Gleeson played semi-bad guy Thomas McGregor) and Star Wars. It’s a good crowd.

What matters most to Gleeson is that he reached someone. You’re doing the work to connect to people, after all, he points out. He says he was congratulated in a New York bagel shop when McDonagh’s play came to Broadway. “That made my life at the time,” Gleeson remembers. “I was like, ‘Holy God, I did something and it mattered to somebody. That’s really cool. Like, that’s really cool.’” He pauses. “And then I went home and was unemployed for quite a while.”

Gleeson and Oscar Isaac in Ex Machina. The pair also appear together in the Star Wars films.
IMDB

At 22, back home in Ireland, Gleeson went full funny. He appeared in a spattering of off-beat Irish comedies involving zombies, footballers, gangsters, and prostitutes. He then starred in the sketch comedy series Your Bad Self, the precursor to armpit farting, juvenile of course, but always hilarious.

Run, then, is something of a return to seriocomic form for Gleeson, now 36. And while it would be of utmost contrivance to equate Run’s tonal shifts from romantic comedy to (without spoiling too much) drama with the actor’s own film career, here we go. Gleeson—skills ranging from funny to charming with the ability to dip quickly into melancholy—really is the perfect performer for Run. And if he’s believable as a semi-famous man on a long train ride, that’s because in another worryingly-close-to-home moment, Gleeson has been there too.

Just after Harry Potter, and at the suggestion of McDonagh, Gleeson caught a train. He went from L.A. to San Francisco. Then onward through Colorado, Utah, and the Moab dessert, “one of the most beautiful things” Gleeson had ever seen. Then across Chicago to New York. “So yeah, I did the whole thing and I just loved it—I met so many interesting people, and it was one of the times of my life.”

It’s also the sort of joy and adventurousness we all need right now. A train to nowhere in particular. And hopefully we get to see more of this Gleeson. More comedies. More jelly. More reason to stay inside and laugh, even at something maybe a shade darker than expected. And what’s not to loave about that?

Tags: 'Run', exactly, is, The
You may also like
Recent Posts