Home
Celebrities
Kudlow: China may systematically damage their economy, we should not follow suit

FOX Business host weighs in on China’s economic policy, the Taliban takeover of Afghanistan and the ‘Build Back Better’ plan on ‘Kudlow’

I have a potpourri of points for you tonight.

First up, we will revisit the China story where Xi Jinping is morphing into Mao Zedong, cracking down on all Chinese businesses and rejecting 40 years of market reforms in favor of pure socialism.

It's a blockbuster story and I'll talk later with former deputy national security adviser Matt Pottinger about what it means to have a government-controlled socialist economy run absolutely by a totalitarian regime and how U.S. investment flows should be curbed—not only for American investor protection but also in order to stop funding China's military buildup.

By the way, the U.S. should not try to "out-China" China by regulating every part of the economy and throwing subsidies at favored industries.

Just because China will systematically damage their economy, doesn't mean we should follow suit and that includes raising taxes to rates that are above China's. We don't want to help them in their socialistic endeavors.

US GOVERNMENT TO PROBE ZOOM DEAL OVER CHINA TIES

Then, we have President Biden at the U.N. yesterday blathering on about the U.S. rebuilding alliances around the world with relentless diplomacy and fealty to multilateral organizations like the Chinese-dominated World Health Organization and the U.N., especially the U.N. Human Rights Commission—which I'm sure will welcome the Taliban with open arms to take their rightful place next to China, Cuba, Pakistan, and Russia—those well-known beacons of democracy and freedom.

Mr. Biden apparently expects a business and professional relationship with the peace-loving Taliban 2.0, which by the way just banned girls from going to school.

Of course, Mr. Biden never referred to the fact that he withdrew from Afghanistan and the Bagram Air Base one night without bothering to tell Britain, France or any of our NATO allies who, by the way, had 8,000 troops in Afghanistan.

Team Biden continues its longing for an Iran Peace Deal, despite the fact that the mullahs are enriching uranium and building new missiles on a daily basis.

Fresh after his U.N. triumph, President Biden met in the oval with British Prime Minister Boris Johnson who was willing to take questions from the British press, which by the way is lethal. 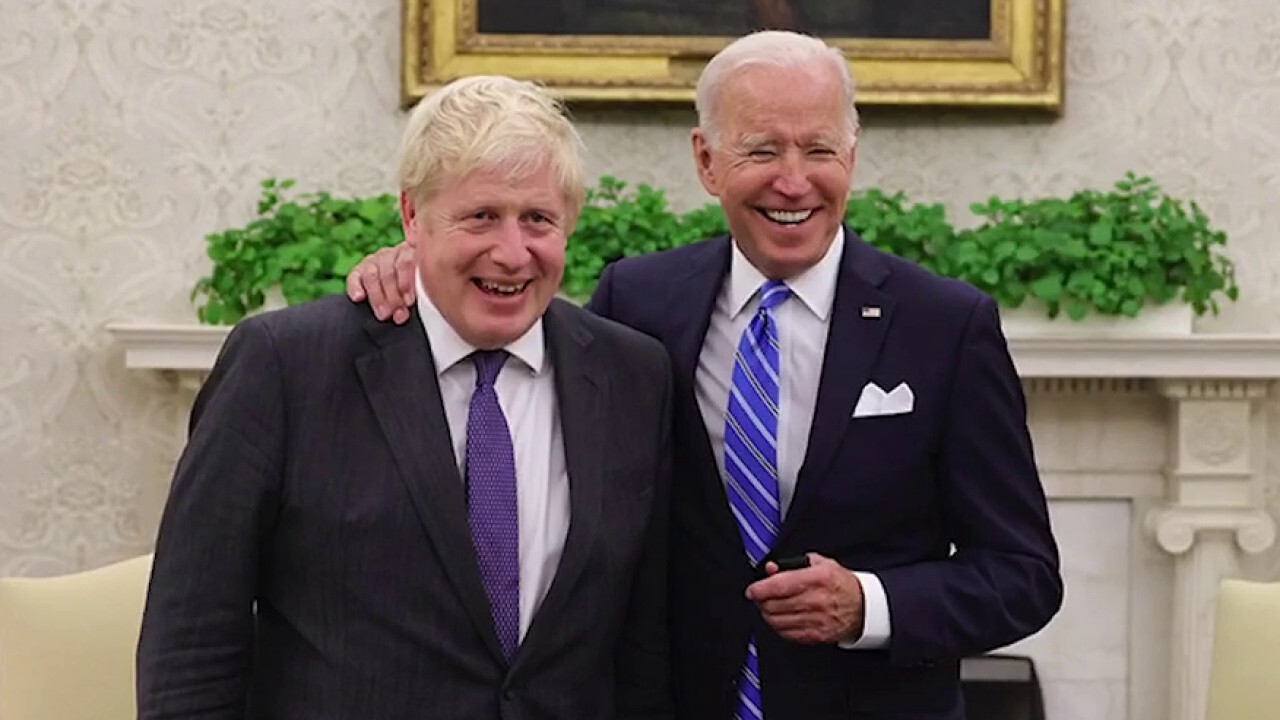 Mr. Biden refused to take questions from the American press that used to be a bunch of pro-Biden pussycats, but maybe learning how the Brits do it in the event.

Biden's handlers kicked all the media out of the oval—not really fabulous for America's international standing.

Despite this, equity shares rebounded by about 400 points because there's no Lehman-like financial crash in China. Jay Powell at the Fed kind of announced a pullback in bond purchases, but kind of didn't announce it either.

The Fed will probably not raise its target rate in my lifetime. So, stocks love free money. At least someone does!

Finally, we get back to the strange goings-on in the U.S. Congress regarding massive spending, taxing, infrastructure, continuing resolutions, and debt ceilings. To be honest, nobody knows what's happening or will happen, and that's why we have Senator Rob Portman coming on in a moment to help us out.

I will just note that the Pelosi Democrats have passed a bill combining a debt limits suspension and a continuing resolution.

In that continuing resolution, the 'Hamas' caucus of far-left progressive crazies made sure to get a billion dollars cut from Israel's iron dome assistance, which is there because they're our greatest ally and it's a defensive move to protect Israeli people.

Also, instead of targeting a new higher debt number, which would force the Democrats to own their reckless spending plans, they just decided to suspend the limit until after next year's midterm elections, but Mitch McConnell will have none of it and that's a good thing.

Incidentally, Speaker Pelosi has apparently decreed that the Senate will determine the spending topline on the reconciliation bill, which is a concession. If I didn't know better, I'd say we of the 'Save America Coalition' that wants to kill the bill, may have Ms. Pelosi and her friends on the run because it's so unpopular.

Finally, the highly regarded Tax Foundation has priced out the Build Back Better Act, at least the House version with the Ways and Means committee mark on tax hikes.

They estimate that long-run GDP will fall by 1%, worker wages will drop by two-thirds of 1%, and full-time jobs will decline by 303,000.

Meanwhile, the net revenue impact will be only $1.06 trillion. So, let me get this right. Build Back Better— brought to you by Biden, Pelosi and Schumer—will reduce growth, lose jobs, and drop wages. Meanwhile, the plan will at least $2 trillion short of pay-fors. Really doesn't sound like such a great deal, does it?

So, I think Joe Manchin is right. Pause the bill until next year, which is effectively killing the bill. Did someone say "save America, kill the bill?" Yeah, I did and that's my riff tonight.

This article is adapted from Larry Kudlow's opening commentary on the September 22, 2021 edition of "Kudlow."

Tags: China, Kudlow, may, systematical
You may also like
Recent Posts