On a recent winter day, Jane Fonda pops out of a side room, looking every bit the Hollywood celebrity-activist that Trumpistas hate. The blond hair someone once described as needing its own agent is perfect, and her white blouse is stylish. She cradles her lapdog Tulea in her arms.

We are at the Wing, a women’s workplace in West Hollywood, for a talk on the climate crisis. It doesn’t seem like Tulea has a speaking role.

Instead, Fonda hands her to a friend and sits on a stool near a microphone with climate activist Lauren Davis. The 500 or so women and four men give her an ovation. Fonda smiles and then does something contrary to the movie-star stereotype: She drops serious knowledge.

“I’m more scared because, on a granular level, things are starting to unravel,” says Fonda, a two-time Oscar winner. She then makes a persuasive argument for cutting emissions by 50 percent in the next 10 years because, well, we really have no choice.

“There will be 200 million climate refugees.” She pauses for a moment. “And we now have a migration program that says nobody can come in. When you go home tonight, just lie in bed and imagine what this means.”

The Coronavirus Is a Fast-Motion Climate Crisis

Children of the Crisis

'A Charlie Brown Christmas': The Making of a Classic Soundtrack

Fonda has been an activist for 50 years, starting with the anti-war movement. Along the way she has advocated for female reproductive rights, opposed the Iraq War, and stood in solidarity with Native Americans at Standing Rock. Her journey began while she was living in Paris in the 1960s, dissatisfied with her life as wife to libertine French director Roger Vadim. She knew next to nothing about the Vietnam War, but what she saw horrified her. So she read Jonathan Schell’s The Village of Ben Suc, an account of the erasing of a Vietnamese village by American troops. That led to full-time activism involving Fonda being smuggled into American bases to meet with anti-war soldiers and then traveling to North Vietnam, where two weeks of productive work was reduced to her being labeled Hanoi Jane when she was photographed smiling while sitting on a North Vietnamese anti-aircraft gun. Fonda was labeled a traitor, with conservatives calling for her to be charged with treason.

Her path to environmentalism has been similar. She says she was rejuvenated by her friend Naomi Klein’s On Fire: The (Burning) Case for a Green New Deal and was, once again, horrified.

“There aren’t two sides to this story anymore,” says Fonda as the women sit silent. “Ninety-seven percent of the climate scientists agree that we are facing a potential catastrophe. But there’s hope that we can do something about it.”

Fonda is fond of the grand gesture — e.g., her Hanoi trip — so she called her friend Annie Leonard, the director of Greenpeace. Now 82, Fonda offered to camp for a year in front of the White House. Leonard politely declined, and Fonda went in a different direction. Inspired by Greta Thunberg’s School Strike for Climate Fridays, Fonda came up with the idea of Fire Drill Fridays, where activists would protest against a different climate calamity — whether it be new fossil-fuel licenses or the proliferation of plastics in our oceans — that would end with civil disobedience. Fonda went out and bought a stylish red coat so she could serve as the beacon of the fire drills. “It’s the last new item of clothing I’m ever going to buy,” Fonda tells me. “Well, except for maybe underwear.”

What started as a small protest transformed into a minor phenomenon in a few months. She told newbies to eat a good meal before arrest because there was no telling how long they might be held. Fonda was arrested five times — “The plastic handcuffs are much less comfortable than the old kind” — and found herself in holding cells with Americans a third her age, from every background. Soon, Fonda had stars like Joaquin Phoenix asking to join. It also broke Fonda out of a psychological funk.

“The minute that I got to D.C. and started meeting with all of these activists, and some of them were 13 years old, the depression and the anxiety went away,” Fonda says. “I never really realized so directly how much that affects me.”

After the talk, Fonda strokes Tulea and sits in a plush white chair with a view of Santa Monica Boulevard. I want to give her a moment to catch her breath, but she jumps right in. I can’t tell if Fonda is joking when she mentions asking Netflix exec Ted Sarandos if they could delay shooting the last season of Grace and Frankie, her comedy with Lily Tomlin, for more activism.

“He said the contracts had already been signed,” Fonda deadpans. Then she smiles. “I’m back here now in L.A., and it’s business as usual, and I’m going to work. But I’m still doing marches, so I haven’t sunk back into depression.” 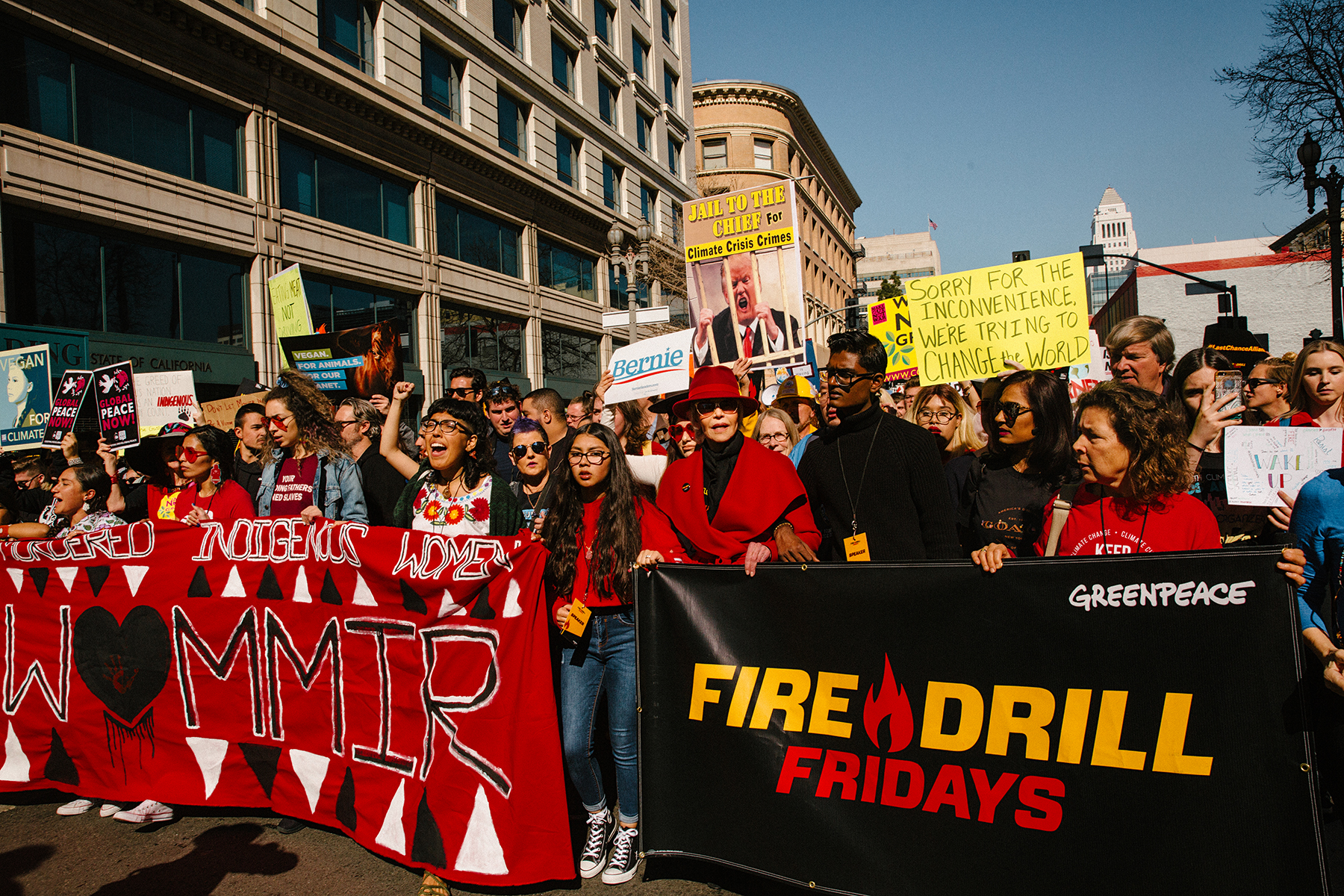 Fonda’s activism isn’t generic; she is working for specific changes. She was scheduled later in the week to meet with California Gov. Gavin Newsom to push for the banning of fracking and closing oil wells that are within 2,500 feet of residences. She is also advocating for California to stop issuing new fossil-fuel exploration permits, reasoning that if California weans itself off gasoline, it’s not much of a victory if the state just starts exporting oil to developing countries or converting petroleum into more soda bottles.

“Exxon recently said publicly, ‘Our future is in plastic,’ ” says Fonda. “If you could read what I’ve been reading about what plastic is doing to the ocean, you would not sleep anymore.”

Despite her legendary career, Fonda has often talked about her need for male approval, ranging from her father, Henry Fonda, to her three husbands, including the tycoon Ted Turner and the late activist Tom Hayden. “I feel that I’m liberated from the men in my life,” says Fonda, although she still finds herself wondering, “What would Tom say?” about Fire Drill Fridays. Regarding her age and gender, Fonda has a sharp rejoinder. “I realized during these four months, two-thirds of the people were women. And the women tended to be older women, because what the fuck do we have to lose?”

She insists that after Grace and Frankie wraps she is going to take two years off to just fight the climate crisis. “I’ll be almost 84. I don’t know what kind of parts I could get at that age, so I may never work again. I don’t know.”

I remind Fonda that she has described 1968, with the Tet Offensive and the assassinations of Martin Luther King Jr. and Bobby Kennedy, as “apocalyptic.” Does she feel that same way now?

Fonda answers simply, which is not her nature. “Way worse,” she says. “We’re living at a time that’s never happened before. Humankind has never been faced with global catastrophe.”

A few days later, on a sunny L.A. day that could delude you into thinking all is fine with the world, Fonda is outside City Hall in her red coat and red hat. She gives 97-year-old Norman Lear a hug and waves to Joaquin Phoenix, who is here for the first California Fire Drill Friday. She speaks against a backdrop of anti-fracking and fossil-fuel posters, and one guy waving a “Hanoi Jane Lock Her Up” sign. Fonda doesn’t see or doesn’t care. Her voice quavers with emotion.

“Oh, my God, I keep looking around and seeing faces of people I love so much,” she says. She doesn’t remain sentimental for long. She hits her point on California being the front line for climate change. “We can have all the solar panels in the world, but if we allow fossil-fuel companies to continue to drill, we’re going to cancel out all the gains we make with renewable energy.”

She then leads the crowd on a march to Maverick Natural Resources, which operates a large number of California oil-and-gas wells. They take over the lobby, and Fonda proclaims, “We are here at Maverick to send a message to California leadership that we need to choose our communities over fossil-fuel companies.”

Between marches and speeches, I ask her what keeps her protesting in the face of Trump, advancing years, and the billions that corporations spend to thwart progress.

“You just have to go on. It’s funny, because I look back at all the people that wanted to kill me,” says Fonda with a sly grin. “People who tried to pass resolutions to keep me from going into their state, Nixon who wanted to get me on treason. Where are they now?”

She points straight forward with her hand as if issuing a command.

“You’ve got to take a leap of faith.”

Fire Drill Fridays, along with Greenpeace USA, is now holding virtual rallies. The first one is scheduled for Friday, April 3. Fonda will be joined by friends, activists, indigenous leaders, and climate experts. Find out more at firedrillfridays.com.