I’m A Celebrity 2022 LIVE: Matt Hancock and Mike Tindall gear up to face puzzling Fallen Stars trial… as the camp prepare for a SEVENTH elimination

Keep up to date with tonight’s episode of I’m A Celebrity…Get Me Out Of Here! as MailOnline follows the episode live.

At least Matt and Mike will do better then 1 star Chris. #ImACeleb pic.twitter.com/NKmsCYG6QM

The camp were informed that they had to choose two celebrities to take on today’s ‘Fallen Stars trial’, eventually deciding on Matt and Mike to take on the challenge.

‘I’ve got a good feeling about this,’ said the MP as he prepared to head down, while Mike said: ‘You won’t be hearing any ‘Get me out of here’ words. Bring it on.’

‘We’ve got the dream team really, we’re up for this, we’ll give it a go,’ added Matt. 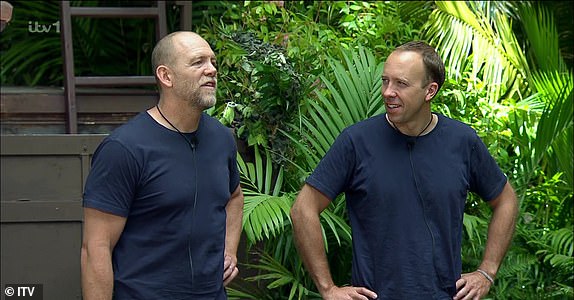 After breakfast, Ant and Dec came down to accounce that it was time for Chris to leave.

And the radio DJ was hugged goodbye by his campmates, as Jill said in the Bush Telegraph: ‘Aw, honestly, I’m so sad to see Chris go, he was a great campmate and I’m gonna literally miss him so much.’

While Seann asked: ‘I’m sure we all feel the same but I cannot believe i’m here, do you guys believe it?’

‘Not at all mate,’ replied Owen. 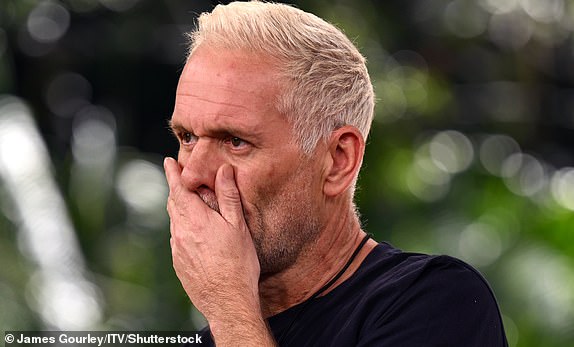 It’s morning in the camp, and the celebrities are ready for a full English breakfast. Mike, Matt and Seann successfully bagged a breakfast for the camp during a trial the night before.

They were delivered goodies such as sourdough bread, hash browns and bacon.

And the camp were certainly pleased with the reward, as Chris Moyles said: ‘The food looks amazing and smells amzing. I’m making a full English breakfast sandwich.’

‘Why can’t we have this every morning?’ begged Owen as he tucked in.

This is your five minute warning!

I’m A Celeb starts at 9:15pm on ITV1 tonight, so get comfortable and ready for the show.

Just one night to go until the Celebrity Cyclone. #ImACeleb pic.twitter.com/VixMjFq1p4

Tonight will see Matt and Mike Tindall take on the bushtucker trial of the day, which is dubbed Fallen Stars.

A preview video for the trial showed the rugby pro being dumped in fish guts while his MP teammate is seen getting covered in bugs during the trial.

And after Chris and Owen Warner only managed to muster up one star in last night’s trial, the camp will be hoping for a better result in this trial.

Last night, Chris Moyles was the sixth star to say goodbye to the jungle – as the vote came down to the radio DJ and comedian Seann Walsh.

Chatting with hosts Ant and Dec in his exit interview, Chris had one last thing to say while leaving the show – and it was a nod to our former Health Secretary, who remains in the contest.

‘I’m gutted Matt Hancock is more popular than me,’ exclaimed Chris, before being greeted by his family after leaving the camp

Good evening and welcome to another evening of I’m A Celebrity…Get Me Out Of Here!

After a jam-packed Thursday evening episode, which saw Chris Moyles say goodbye to the jungle as the sixth evicted star, MailOnline is back to follow another episode.

It’s almost time, make yourself comfortable for an hour and five minutes of jungle content on. ITV1.