Home
Celebrities
'Extraction' 2 Is Reportedly Already in the Works

While Extraction came out just last weekend, the action movie has already warranted a huge response from fans. The film stars Chris Hemsworth as Tyler Rake, a mercenary and former soldier recruited by another mercenary to travel to Bangladesh and help rescue Ovi, the son of an Indian drug lord being held captive by a rival vicious drug named Amir Asif.

As you can expect, things don’t go as planned, and violence and chaos ensues. At the end of the movie, it seems like Hemsworth’s Tyler is going to get away from the corrupt police and task force that he’s been battling for the whole film, and he runs toward a helicopter that will take him to safety—until he’s suddenly shot in the neck by Amir’s young henchman. The injured Tyler then falls into a river, and while he’s not seen again, the movie’s ambiguous ending has led fans to believe that the mysterious man watching over Ovi seen at the end of the end of the movie is, in fact, Tyler.


Some hopeful fans believe that the mysterious ending means Extraction will get a sequel—here’s what we know so far.

Will there be an Extraction 2?

The short answer is yes, there will probably be a follow-up to Extraction. The movie’s director, Sam Hargrave told Digital Spy that he was open to creating another Extraction movie, even if it wasn’t a direct sequel. 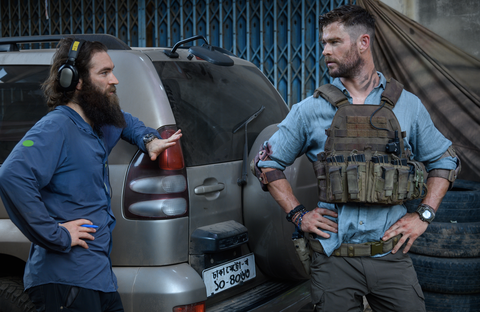 “We’re all going to wait to see how fans react to the film. And based on that, there have been discussions of different storylines that could take place in different times–both forward in time and backwards in time,” he explained. “We’re just waiting to see what happens, and to see how the appetite is for these characters and for this film. And then we’ll make our decision. But there definitely have been discussions of broadening this world, for sure.”

If there is an Extraction 2, it seems likely that Chris Hemsworth will reprise his role as Tyler. And in extremely exciting news, it’s been rumored that Chris Evans is being eyed for a role in the sequel, which makes sense if you remember that the Russo Brothers (yes, those brothers of Marvel fame), produced Extraction, and Joe Russo wrote the screenplay. As for the sequel’s villain? Execs are reportedly trying to snag Oscar Issac for a role as a drug lord.

Casual cast. No big deal. Just three of the biggest movie stars in the world, that’s all. Our fingers are crossed—we’re just going to jump off a cliff into a body of water in the meantime.

Tags: 'Extraction', 2, is, Re
You may also like
Recent Posts