We would “quit drinking” too, if it meant having such intense chemistry with someone as Kelsea Ballerini and Paul Klein had with each other while performing “I Quit Drinking” at the 2021 CMT Awards. Ballerini doubled up on duties at the Nashville award show, as she took to the stage to not only perform but co-host the show alongside Kane Brown.

The multi-nominee herself, who won CMT Performance of the Year with Halsey, started the night off hot — and by “hot” we mean in hot pink — as she strutted down the red carpet wearing a pleather look Elle Woods would certainly be proud of. And the eye-catching looks continued for Ballerini, which undoubtedly caught the attention of her duet partner, Paul Klein, lead singer of LANY. For the dramatic debut of “I Quit Drinking,” Ballerini showed off a long shimmery blue gown with a deep neckline and thigh-high leg split.

Both Ballerini and Klein teased the new track on their respective Instagrams on June 7 with Ballerini writing how “stoked” she was to share it — and the song certainly lived up to the hype. Ballerini opened the ballad by gliding across a rooftop that overlooked downtown Nashville, before eventually uniting with Klein inside the Bridgestone Arena. Plus, the stunning special effects did not go unnoticed.

In order to get the scoop on their captivating body language during the performance, Nicki Swift spoke to Media Trainer and Communication Consultant, Jess Ponce III, who unpacked it all. 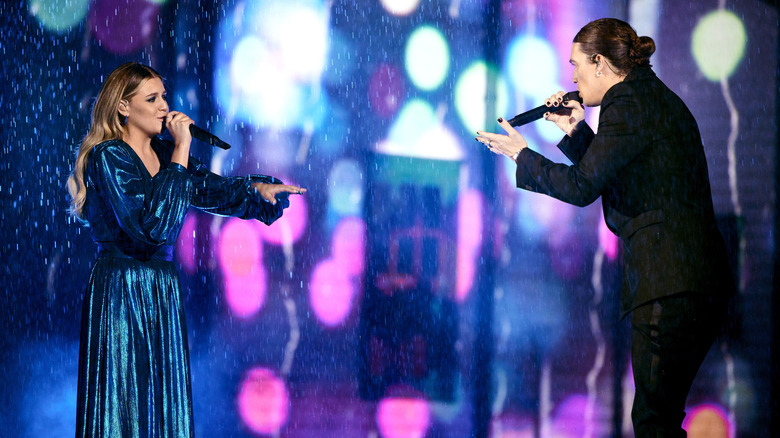 While Kelsea Ballerini has been married to fellow singer Morgan Evans since 2017, Paul Klein has kept any relationships low-key since his 2018 split with Dua Lipa. Ballerini and Klein’s breakup anthem, “I Quit Drinking,” is about someone going tee-total due to painful relationship memories fueled by alcohol. While it’s not clear whether the song is in reference to any of their past relationships, Media Trainer and Communication Consultant Jess Ponce III, author of “A.W.E.S.O.M.E., 7 Keys to Unlock the Speaker Within,” says their performance was filled with emotion: “The two gazed upon one another intently, as if no one else was around. Given the theme of the song it worked beautifully.”

In the mournful piano-led song, they sang about pining for “whiskey” and “champagne,” but also the people they used to share it with.

“Their bodies were leaning forward, and as they took steps to meet one another in the center you could feel the intensity of emotion,” Ponce said. Once they got close to one another, they began circling and building emotion, which Ponce said was evident in their “hand gestures, which were moving forward” and “thoughtful, loving, yet cautious facial expressions.”

And as the song came to a close, the pair poured their hearts out in a breathtaking blue and white light rain effect, which Ponce suggested was “symbolic of a downpour of emotion.” All the single folks will be streaming this one!

Tags: Ball, Breaks, Down, expert, Kelsea
You may also like
Recent Posts