When roasting the ‘Fuller House’ alum on social media, the former judge of ‘Bring the Funny’ jokingly asks for the former’s help to get into a hospitality school.

AceShowbiz –Chrissy Teigen knew how to mock Lori Loughlin in a funny way. While throwing shade at the “Fuller House” alum over her college admissions scandal, the “Chrissy’s Court” star intentionally misspelled the latter’s name in a social media post.

The 35-year-old cookbook author dissed the actress via Twitter on Tuesday, April 27. “I wanna go to hospitality school. I am old and didn’t take my SATs. How does this work now? How do you get into school? Do I have to Laurie Laughlin photoshop myself being hospitable,” she quipped, before adding in another tweet, “Dammit it’s lori!!” 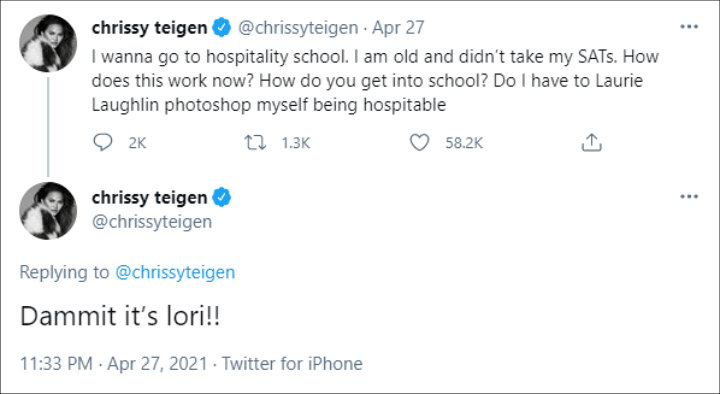 Many of Chrissy’s followers found her post amusing and they also approved her jab. One user in particular replied, “It’s completely appropriate to misspell her name.” Another individual chimed in, “And Loughlin but ‘Laugh’ seems right.” A third added, “The Lau in both the first and last name is more satisfying. Can we get her to change it.”

The former judge of “Bring the Funny” referred her joke to Lori’s college bribery scandal. She and her husband Mossimo Giannulli pleaded guilty to paying $500,000 to help their daughters Olivia Jade Giannulli and Isabella Rose Giannulli secure places at the University of Southern California.

Lori and Mossimo both served prison sentences for their role in the scandal. The former “Full House” star was released from jail in late December 2020. Her fashion designer husband, meanwhile, became a free man earlier this month.

That aside, Chrissy’s tweets came around two weeks after she made her return to Twitter. In her first post since her hiatus, the wife of singer John Legend explained, “Turns out it feels TERRIBLE to silence yourself and also no longer enjoy belly chuckles randomly throughout the day and also lose like 2000 friends at once lol… I choose to take the bad with the good!!”