The stars of ‘Full House’ and ‘Fuller House’ are devastated by the sudden death of Bob Saget. Andrea Barber, Juan Pablo Di Pace, and more of his co-stars are paying tribute to the ultimate TV dad.

The world has just lost its beloved TV dad. Actor and comedian Bob Saget was found dead in his hotel room in Orlando on January 9. He was only 65 years old.

Upon hearing the news, the co-stars who worked alongside him on Full House and later the Netflix spinoff series Fuller House reacted to Bob’s tragic and sudden death with heartfelt tributes. From Andrea Barber, who grew up on the set of Full House, to Juan Pablo Di Pace, it’s clear that Bob was a loved man by all. Read the reactions from his co-stars below. 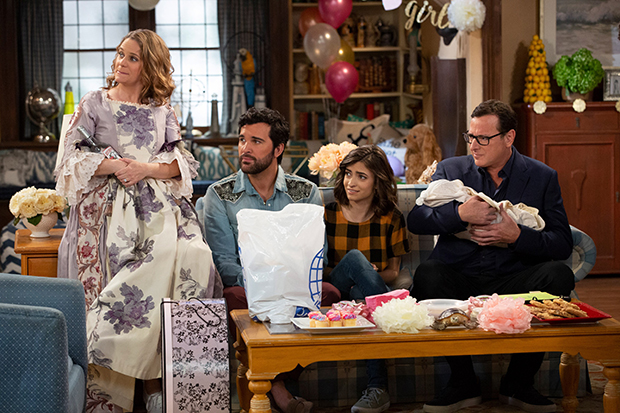 Andrea played Kimmy Gibbler on Full House and Fuller House. She spent countless hours at the Tanner household and alongside Bob. She remembered Bob loving “so deeply and so fiercely.”

“This one hurts,” she began in her Instagram tribute. “He had the biggest heart of anyone in Hollywood. He gave the biggest hugs. I am gutted that I will never be able to hug him again. Bob ended every text, every interaction with “Love you.” Didn’t matter how long or short we’d been apart. He loved so deeply and so fiercely. And he never hesitated to tell you just how much you meant to him. This is the greatest lesson I learned from Bob Saget – don’t hesitate to tell people you love them. I feel at peace knowing that Bob knew exactly how much I adore him. Rest well, my dear friend. I have no doubt you are making everyone in Heaven laugh until their cheeks hurt, just as you did here on Earth.” 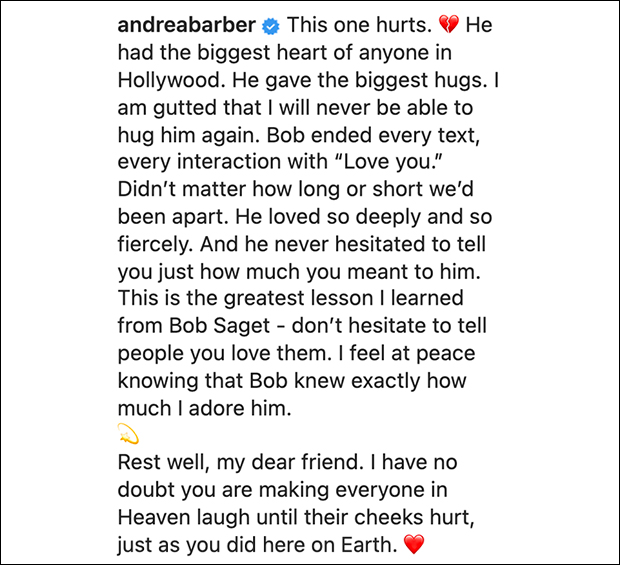 Juan Pablo starred as Fernando, Kimmy’s on-again, off-again husband, on Fuller House. He was a recurring star in the first season and became a series regular for seasons 2 through 5.

“An amazingly kind and generous man left us today. Will miss you a lot Bob. So so much…” Juan Pablo captioned two photos that featured Bob on Instagram.

John Brotherton played Matt Harmon, one of D.J.’s love interests on Fuller House. Like Juan Pablo, John was a recurring player in season 1 and became a series regular for the rest of the show’s run

“His heart was abundantly full of love and kindness for others. Determined to make everyone smile and laugh and love a little more. He was truly the best. Thank you for all the kind words of love and inspiration Bob. You will be infinitely missed by all, forever. Rest in peace, love… and laughter…” John wrote on Instagram.

“Nov. 8 was the last day I saw Bob Saget,” Elias wrote. “I was at the showing of my friend McKenna’s movie, Ghostbusters. It was a chance meeting. He will always be my Grandpa Danny. Bob was the true patriarch of Fuller House. He was a warm and loving man. I will miss him a lot. I’m literally in shock.”