Home
Celebrities
Amelia Hamlin Just Declared Her Love for Scott Disick, So Guess We Should Probs Get to Know Her Better

Remember back when Scott Disick started dating Amelia Hamlin and everyone assumed they’d last approximately two minutes? Lol, wrong. These two have been dating since fall 2020, and Amelia just made it super clear how serious they are by publicly declaring her love for Lord Disick on Instagram. Like, on. the. grid. In case you missed it due to not following Amelia (she’s @ameliagray), here’s what she wrote about Scott for his 38th birthday:

“Happy birthday my love. you light up my life, and make my world better. i can’t imagine what i would do without you. thank you for being you. the most caring, loving, special person on this planet. i’m so lucky. i’m so blessed to have met you. i love you.”

Wow…okay! Guess this is truly happening! Which means it’s time to get to know Amelia a little better—especially since Kim Kardashian recently confirmed that Scott will be joining the Kardashian family for whatever they get up to on Hulu, meaning Amelia could be making an appearance by his side….

You’ve def heard of Amelia’s parents before. Her dad is none other than Mad Men’s Harry Hamlin, while Real Housewives of Beverly Hills‘ very own Lisa Rinna is her mom. Look how cute this tbt of their lil family is:

Yeah, She Has a Sister 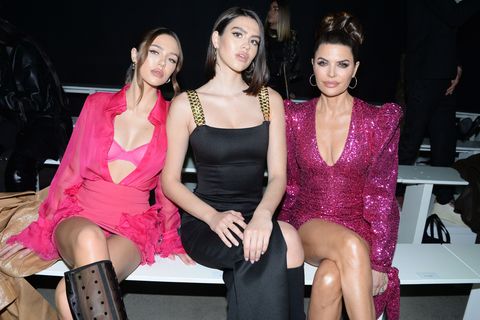 Both Amelia and Delilah have made regular appearances on RHOBH through the seasons, as you can see in this pretty iconic series of clips (shout-out to Amelia melting down over One Direction).

While Amelia seemed to enjoy herself on the show, comments she made in 2020 briefly caused speculation that her mom forced her to be on-screen. Basically, Amelia responded to an Instagram troll who accused her of lying about her battle with anorexia in order get more “air time.” In response, she said “I seriously can’t believe I’m being accusing of lying about anorexia to get more ‘air time,’ sorry but I’m forced to be on the housewives by my mom. Ask anyone it’s the last thing I want to do. I couldn’t care less about air time. So fuck you.” 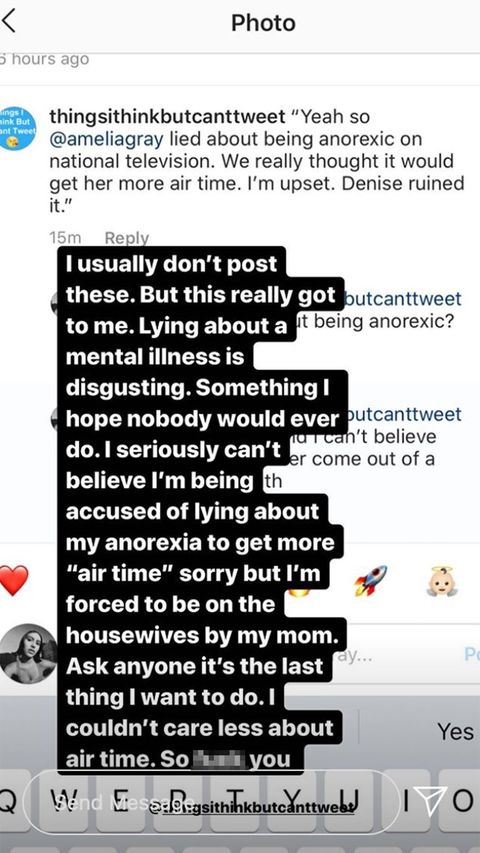 Those comments caused fans to wonder whether Lisa had made her kids appear on Housewives, which Amelia swiftly shut down in a follow-up:

It’s not that they don’t get along, it’s just that they don’t want to bother to get along, ya know? An insider told E! News about the vibe at Scott’s party, saying “Amelia was, of course, invited to his party but her and Kourtney do not necessarily have a relationship. Kourtney is cordial. There’s no bad blood but they just kept to themselves at the party. Kourtney doesn’t mind having her around. She’s just not looking to get close with her.”

Amelia is currently 19, and yes, the internet has feelings about her and Scott’s relationship. But apparently the age diff is no bigs according to a source who mused to Us Weekly, “Scott’s dated Sofia, so age isn’t really an issue for him. Despite their age difference, they have more in common than people would think.…He sees himself as being younger than he is. Amelia is really mature and acts older than she is, so they get along pretty well.”

Side note: anyone else convinced that Travis Barker/Blink-182 prophetically wrote the lyrics to “What’s My Age Again” about Scott Disick? Same.

These days Amelia models mostly on Instagram via #ads, but also on the runway—which makes sense considering she’s super tall at 5’9”! Here she is walking New York Fashion Week with her sister a few years back: 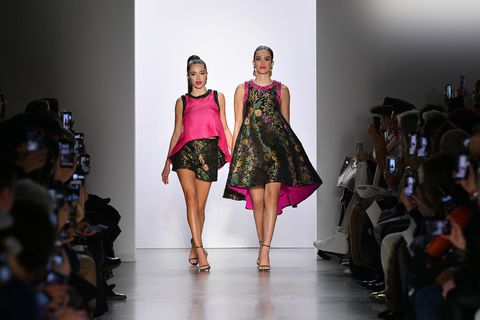 She and Scott Have a Diff Vibe Than Scott and Sofia

A lot of people are inevitably comparing Scott’s relationship with Amelia to his previous relationship with Sofia Richie (probably because they’re both younger than him and both have famous parents!), but the vibes are different.

In other words, Amelia is completely unbothered, next!

Tags: Amelia, declared, Hamlin, he, Just
You may also like
Recent Posts