Michael Kors is turning the lights back on Broadway to kick off his brand’s 40th anniversary.

The Broadway fanatic, along with “a cavalcade of Broadway legends” including Chita Rivera and Billy Porter, will be live for a pre-show on Tuesday morning in Times Square. They’ll be introducing his fall collection film, starring Bella Hadid, Naomi Campbell, Precious Lee, Irina Shayk, Ashley Graham and more, in a love letter to a life full of opening nights with the hope of more to come soon.

“The heartbeat of New York is the Theater District, and to see it just stopped was hard to comprehend because New York doesn’t stop,” said Kors of the pandemic’s chilling effect on the city and the arts.

For his latest show, he wanted to honor the struggle of the Broadway community and make a pitch for live performance, even if for now, he’s doing so with a short film.

“It’s about that opening-night feeling…I want everyone to have this fabulous night out where you have an amazing dinner and drinks at Sardi’s, with theater history oozing out of the walls, then you hit the street, strut your stuff and show off. And you get to go into a temple of live performance and see Rufus Wainwright performing,” said the designer, who has been a Broadway lover since age 5.

Broadway was shut down March 12, 2020; at least four productions have permanently closed due to the virus, and others have been postponed with an impact on 87,000 jobs.

All of the Fashion at the 2021 BAFTA Awards

Several Midtown theaters are advertising the Kors event on their marquees, including the Booth, Imperial and Music Box theaters. But the Shubert, which he filmed inside, is the designer’s favorite. “One of the Valhalla moments was seeing ‘A Chorus Line’ there.” Another was seeing Bette Midler in “Hello Dolly.” “In the opening scene, when her face was covered with a newspaper, and then it comes down…I had never seen an audience go that insanely berserk. It was a 15-minute cheering standing ovation and she hadn’t opened her mouth!” 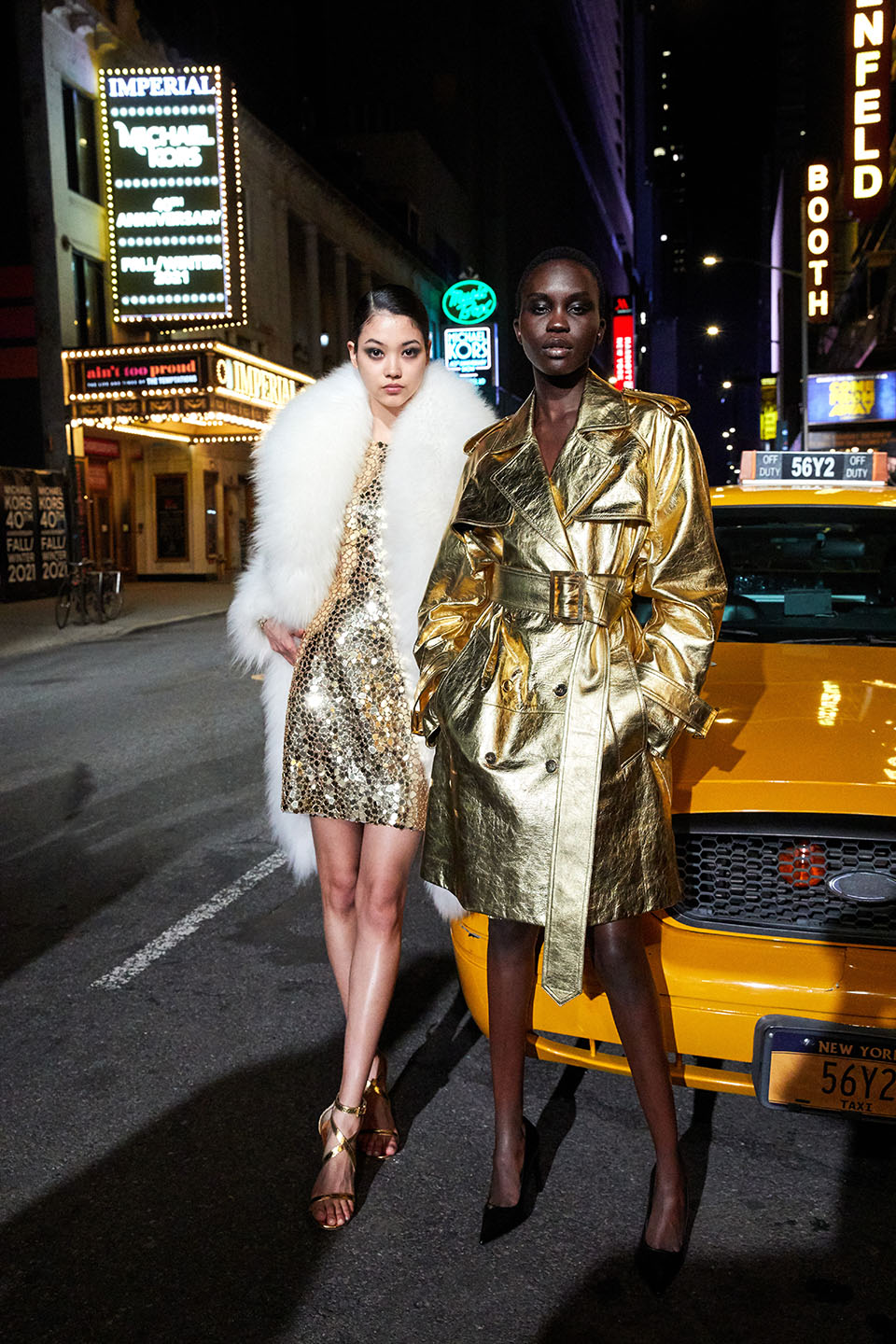 Shooting the anniversary collection over two nights was a special occasion in and of itself. “It was overwhelming — being in the fashion community again, with people we have collaborated with forever, hair, makeup…models, it felt like this surreal party…And being in Times Square at midnight, and seeing the energy return — and that’s without theater and restaurants — it really shows you peoples’ pent-up desire.”

He’s certainly experienced it. “Last January when it was bitter cold, we went to dinner outside….I had mukluks on, it was insane. I ran into someone in the industry I haven’t seen in over a year, and she said, ‘Aren’t you itching to go to a bad dinner?’”

New York holds the same magic for him now as it did when he was growing up in Merrick, Long Island.

“Being a suburban kid, Manhattan was always the Emerald City…I feel like that about a lot of cities in the world where young people rush to create and express themselves.”

To coincide with the collection release, the Michael Kors company and Kors himself will be making donations to The Actors Fund, the nonprofit that helps more than 17,000 people in the entertainment industry each year, not just actors. “It was important to support people behind the scenes, because they don’t have an exact date back…So many people have had to leave town, to move home. We’ve seen that all around the world in every large city. Hopefully we can keep the talent because I think we will have a resurgence of young people wanting to bring back theater and art and music and fashion.”

Thinking about that brings him back to when he started. “I didn’t have a penny to my name, I lived in a terrible apartment with sewing machines in it. And New York was in a terrible spot,” Kors said. “But creative people were finding their way and I hope we see that again, I think we will.”

And when the lights do come up again on Broadway — for good — Kors believes the show’s going to be bigger and better.

“I’ve never heard more women asking for evening clothes, and clothes to wear back to the office to feel more important,” he said of the fashion feedback he’s been getting from clients during virtual trunk shows and appearances. “I had one woman who said, ‘I’m afraid my foot forgot how to wear a heel.’  Another said she’d started practicing in her house!”

As someone who likes runway theater, too, and has had Barry Manilow, Orville Peck, and Young People’s Chorus of New York City perform for his New York Fashion Week spectacles, as well as Wainwright once previously, he’s feeling optimistic about a return to live fashion shows. “We’ve been watching theater streaming in our house, it’s not the same. And while we were filming this, watching the models strutting their stuff on-screen, I kept wishing the audience could be there.”

Tags: Michael Kors
You may also like
Recent Posts