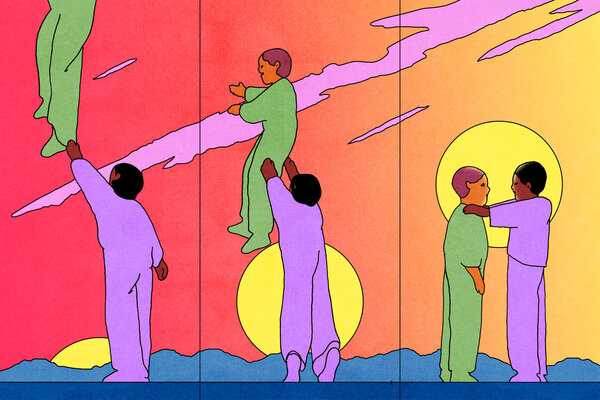 It’s time to put our extremely online year (and selves) behind us.

It shouldn’t have come as a surprise to anyone who’s ever been on the internet that — during a pandemic, under several lockdowns — our worst online tendencies, in the immortal words of “Spinal Tap,” went to 11. It felt like everyone went slightly Jack Torrance from “The Shining.”

That’s OK: An invisible, potentially fatal virus was floating around outside, being politicized as it killed and spread unmitigated. It basically was a Stephen King novel (adapted by Stanley Kubrick). We rushed online, trying to blunt the impact of our solitary confinements by finding other people to be with. We were trying to save ourselves.

There were some good things to come out of all that time online. But there were also some extremely bad things: It started with white-hot takes about how Shakespeare wrote “King Lear” under quarantine. Before people could finish reading those, we were showered with magma-temperature rejoinders about how nobody should feel the need to be productive under a quarantine. Everyone had someone to hate, someone to cancel, someone to praise, some way to practice self-love, and someone who was doing it wrong.

And so, I am making a proclamation here for all to read: It’s time to put our extremely online year (and selves) behind us. It’s time to stigmatize the internet.

At least for the next year or two, let’s have some standards, some kind of unified code of etiquette that keeps us (and our conversations, and our passions) tied to a world that’s not so extremely online.

For instance: If the person consuming your brain space has some kind of nickname that implies an incredibly stupid online-only drama (“Bean Dad,” “Bodega Lady,” “Cinnamon Toast Crunch Shrimp Tails Guy”), or their primary mode of attention seeking is through self-created melodrama (anybody whose name is collected under the search parameter “influencer apology”), then do not bring them into decent conversation. We can, perhaps, reduce their incidence.

If somebody brings up somebody who was “canceled,” and their cancellation takes more than a single sentence to explain, without any follow-up questions, they and their inquisitors are already occupying too much space in your conversation. And life.

If you need to reach for your phone to demonstrate something for the purposes of continuing a conversation, don’t.

If you’re mad about something that played out almost entirely on social media platforms — someone tweeted or TikTok’d or Instagram Storied something ignorant — holster that clap-back and take a walk around the block.

No more laptops in coffee shops, or at good bars. Ruin SoHo House or WeWork with them, but nowhere more public than that.

Yes, the internet is a part of our daily lives, inextricably linked from most of the things we do, now. But when not entirely necessary, the internet should be known as the place where work and procrastination get done, and that’s it.

After a year at home, we will have freedoms we didn’t have for the last year.

We’ll gaze into new eyes, sit in public spaces; go to concerts; sweat on one another at gyms. And we’ll do it all without fear, hesitation, or strangeness, or reluctance. We’ll have prolonged silences with one another.

If you’ve got your phone out for any of this, or you’re talking about things that happen exclusively on your phone, let’s agree: You’re in the wrong. Are you out at dinner with others, checking your DMs? Don’t. That concert doesn’t really need to be filmed, does it? Don’t you want to get lost in the rapture of being alive, of dancing on a downbeat?

We can, now! Unplug! Unfurl! Turn off, tune out and drop in: The world of close proximity is soon available to you again. Don’t let the internet drag you out of it.

Foster Kamer is a writer and editor based out of New York, currently the content director of Futurism, He also writes a newsletter called FOSTERTALK.

Tags: Computers and the Internet, tec
You may also like
Recent Posts