Director James Gunn’s “The Suicide Squad” offers a fresh take on some of DC Comics’ most infamous villains, all of whom are brought to life thanks in large part to the film’s costumes.

Gunn tapped three-time Academy Award nominated costume designer Judianna Makovsky for the project, enlisting her with the task of translating the comic book characters’ well-known uniforms to the big screen.

“When you work with James Gunn, it’s sort of a dream process,” said Makovsky, who also worked with Gunn on “Guardians of the Galaxy Vol 2.” in 2017. “On ‘The Suicide Squad’ particularly, it’s almost like doing theater. It was the production designer, myself and our concept illustrators all in the same room with James Gunn for six to eight weeks alone just figuring out what the movie was. You don’t normally work that way on films, especially these big comic book movies. James just creates that atmosphere of absolute collaboration.”

Unlike other comic book movies that have steered away from the source material for its costumes, Makovsky referenced the original DC Comics extensively for certain characters per Gunn’s request, like for Harley Quinn, Bloodsport, Peacemaker and others.

The Cape Makes A Return On The Runway

Makovsky’s design strategy proved to be challenging, as many of the villains’ costumes were difficult to translate from the comic books to a physical garment. One of the most challenging pieces to create was Peacemaker’s comically large helmet. After many illustrations and iterations of the headpiece, Makovsky and her team decided on a shiny chrome helmet that Cena and Gunn loved so much it was worn throughout most of the film. 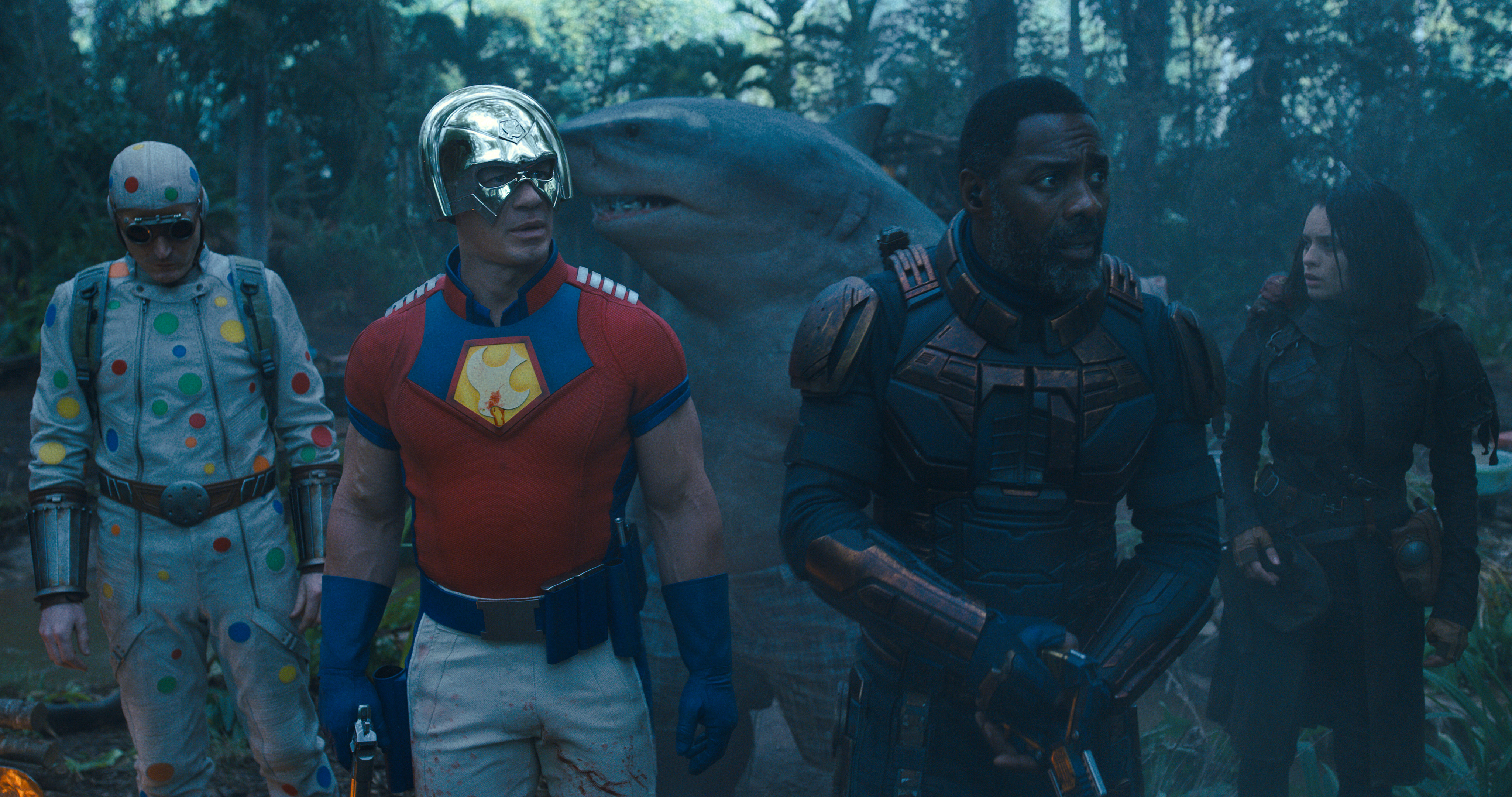 A still from “The Suicide Squad.” Courtesy

“I thought we were just going to use [the helmet] for hero shots, and then James saw it and the director of photography and they were like, ‘no, we want it all the time,’” she said. “We did so many designs of that helmet and they were all just ridiculous. The funny thing is when we put it on John [Cena], he loved it and wouldn’t take it off, so he ended up wearing it a lot more than I thought he would in the movie.”

Perhaps the most-watched character in the film is Robbie’s Harley Quinn, who the actress has portrayed twice already: in the 2016 version of “Suicide Squad” and her own stand-alone film, “Birds of Prey,” last year.

Gunn, Makovsky and Robbie wanted to change up Quinn’s look in “The Suicide Squad,” going back to her comic book roots with a black-and-red outfit.

“The first thing James said to me was, ‘I want to get back to the black and red,’” Makovsky said. “He wanted her first outfit to be more of a battle outfit. She knows she’s going on a mission, so she’s not going to go in little shorts. Margot also said, ‘I think we’ve done that look, let’s move on,’ so we came up with an iconic Harley black and red look with the black and red hair. It was sort of a no-brainer for everyone to do that.”

Makovsky also said Quinn, like many of the other characters’ costumes, is story-driven. This is most apparent in the red, Cinderella-esque ball gown that she changes into to meet the Corto Maltese dictator, who after sharing his evil plans with her proposes marriage. Quinn, seeing the red flags, refuses his proposal and does her part in making sure his evil plans don’t come to fruition. 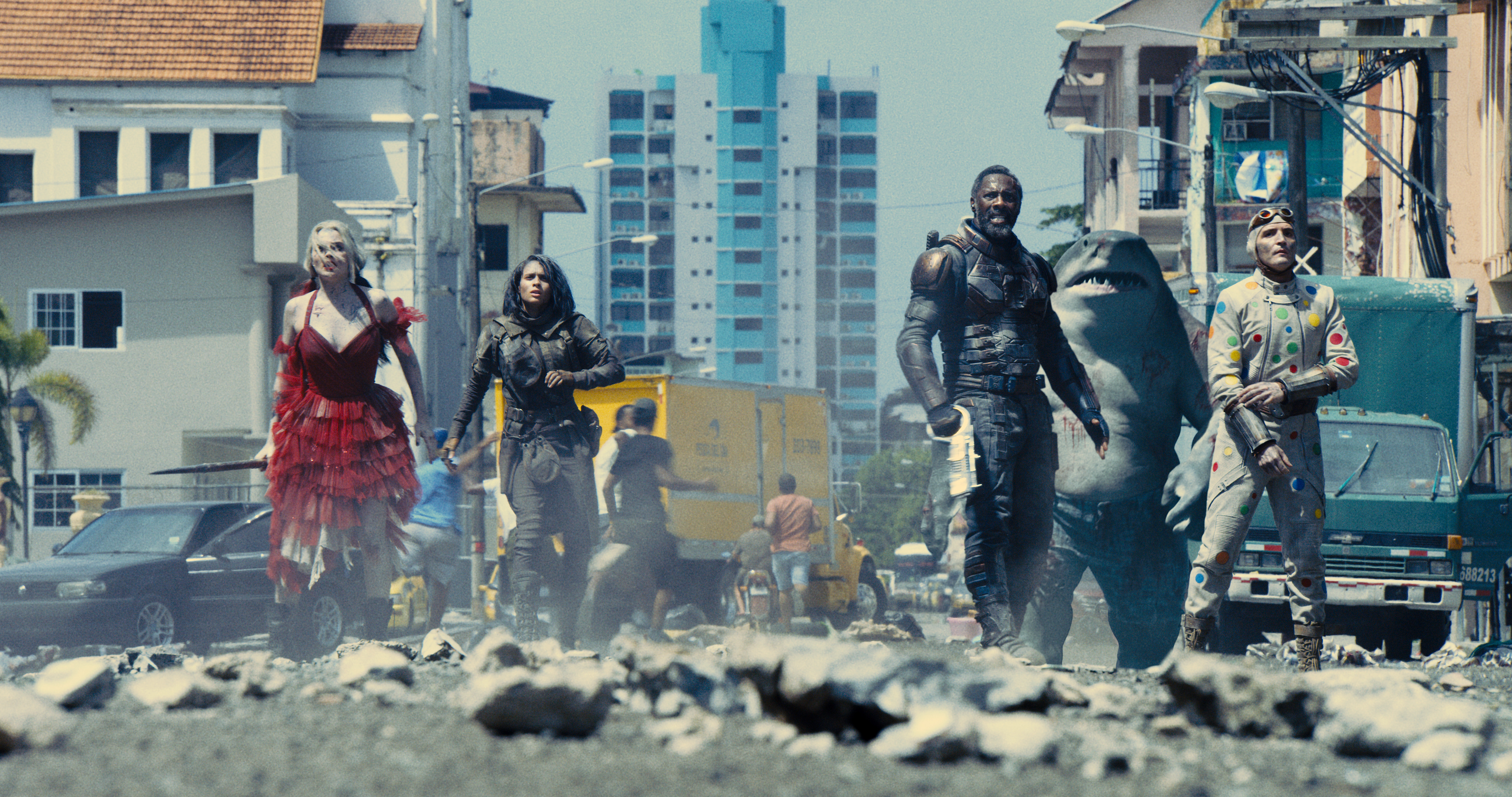 A still from “The Suicide Squad.” Courtesy

While it was important for Gunn and Makovsky to reference the comic books for the costumes, both wanted the costumes to reflect the fact that these villains are unique characters and come from various backgrounds. Unlike other ensemble comic book films, “The Suicide Squad” villains are not a team by choice, but rather by necessity.

“One thing that James always said to me was, ‘I don’t need [all the villains] to look like they came out of the same film,’” Makovsky said. “They should all look like they came out of their own movies and just ended up together. That sort of freed it up because normally we have all the techniques the same [for the costumes]. For this one, we didn’t really have to do that and each character could be unique.”

Makovsky believes that the villains’ costumes played a central role in their identities and served as a way for the actors and actresses to fully connect with their characters.

“Costumes inform who the person is,” she said. “Most actors will tell you that without costumes, the character isn’t there, so it’s a process of discovery in the fitting room to find who that character is. In every film, no matter what it is from a superhero film to a period fantasy, every garment you put on a person is important and well thought through.”

Who Are the Real-Life Characters in the ‘House of Gucci’ Movie?