BRIDE-to-be Cindy Thompson, who left First Dates viewers in tears when she revealed her “vibrant, intelligent” mum had a terminal brain tumour on the popular show, has had to postpone her longed-for wedding.

Cindy and Elan Cohen’s big day was a “symbol of happiness and moving forwards” for their families after the trauma of her mum Angela’s death from a glioblastoma, the most common aggressive brain cancer in adults, in June 2018. But their wedding has been put on hold due to the coronavirus pandemic. 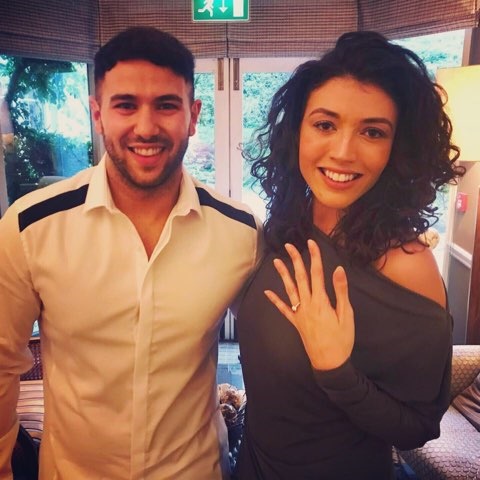 “We were so excited about our wedding and just long to be married now,” said Cindy.

‘’After everything we’ve been through, we wanted to draw line in the sand – and it was my mum’s last wishes that we should be happy again.

“But we knew it was the right thing to do as we had over 100 wedding guests and 10 people coming from abroad, including Elan’s best childhood friend.

“My dad is self-isolating as he’s in his 70s and Elan’s mum and sister have under-lying health conditions. 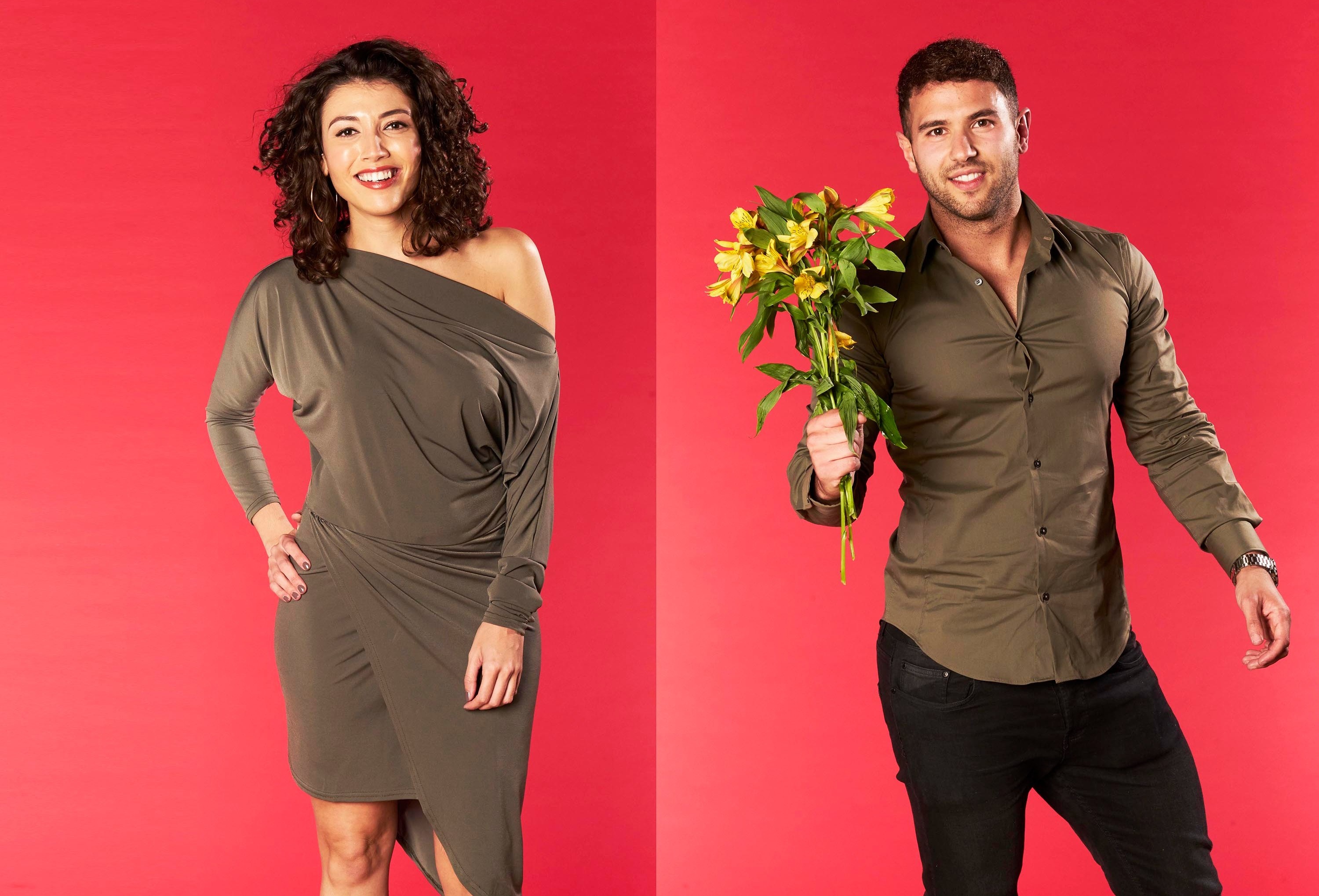 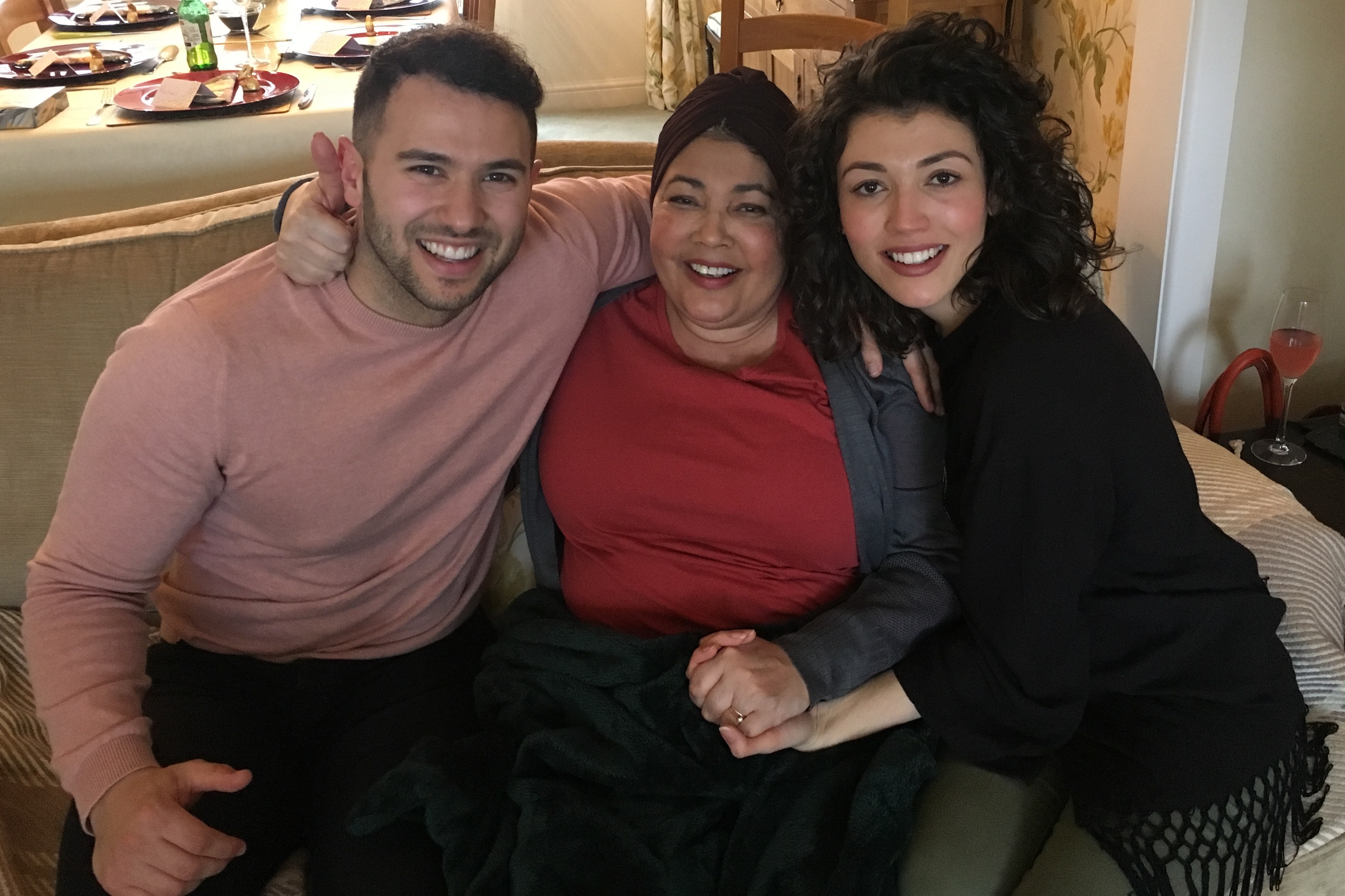 “The most important thing was not exposing anyone to harm.”

After the couple had already made their decision, the Prime Minister Boris Johnson this week announced a lockdown, banning public events including weddings.

Cindy added that it was a “massive anti-climax” to postpone the wedding but that she “counted her blessings.”

“Our disappointment is nothing compared to the terrible impact of Coronavirus on people and the burden on our amazing NHS workers,” she said.

The couple managed to rearrange the day from May 17 – the week after Cindy’s 30th birthday –   with the same venue and caterers for November 8. 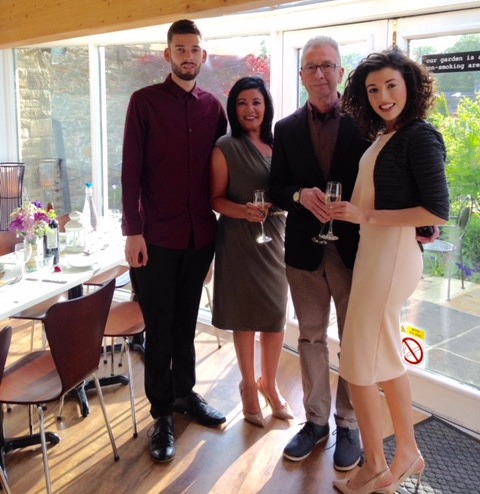 And it means everything to Cindy to have the same celebrant from her mum’s humanist funeral officiating at their wedding.

“That was my first call – to make sure Erica was free on the new date, which thankfully she was,” said Cindy.

“And then we rebooked the venue, Owen House Wedding Barn, in a lovely little village in Cheshire,

“It was booked up for every Saturday in 2020 and 2021, but as Elan is Jewish, we’re getting married on a Sunday, and we were so lucky they had one free.

“Then we rearranged our caterers for the three-course meal and evening buffet, too.

“We’re hoping that we’ll be able to have our honeymoon in Sri Lanka in January.” 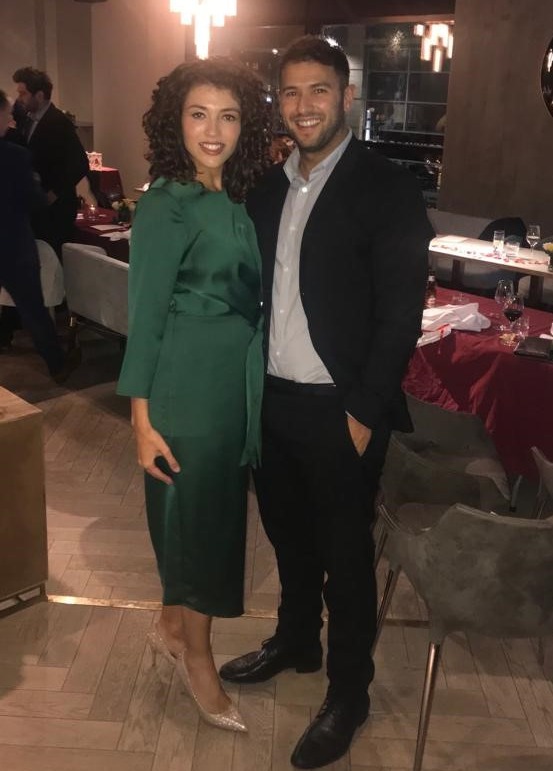 And as a senior food buying manager for a supermarket, Cindy has been hectic sorting out supplies.

“It’s been crazy with 100s of people queuing up outside the store and we’ve had to have extra security,” she said.

“My dad has been self-isolating as he’s in his 70s and we’ve been making the hour drive once a week to Skipton to drop him off some shopping.

“It’s so hard not being able to give him a hug, especially as we all missed Mum so much on Mother’s Day.

The couple’s romance started when they fell for each other on a First Dates episode, filmed in October 2017.

They turned up in matching outfits and #TeamKhaki trended on Twitter.

During the emotional episode, aired in April 2018, they bonded as Cindy shared her heartbreak about her mum Angela’s terminal brain cancer, and Elan confided in her about his mum’s depression. 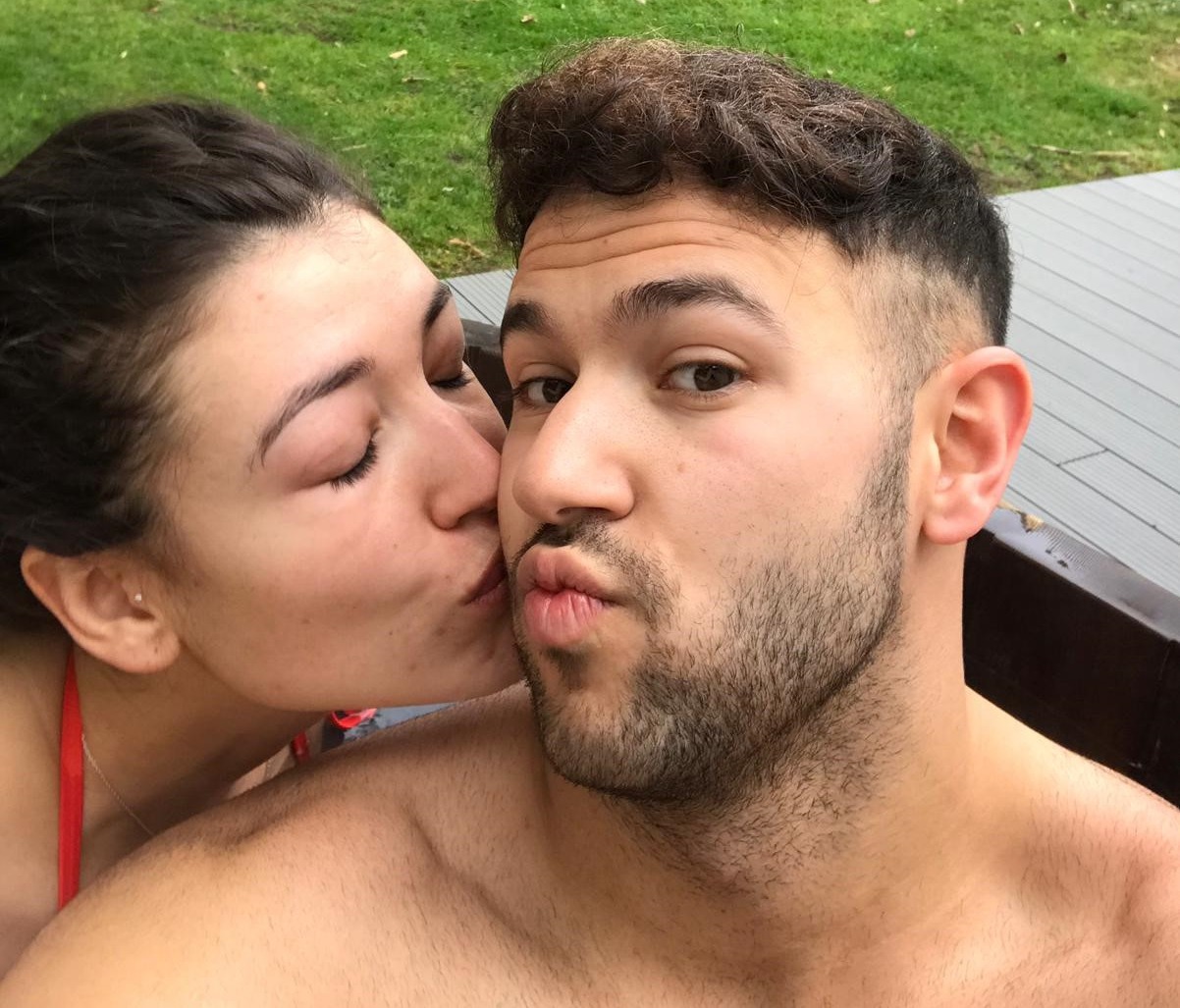 “As soon as Elan walked in, I knew he was my type looks-wise – dark, handsome and lovely teeth,” said Cindy.

“His personality more than matched his looks – he was easy to talk to and so understanding and compassionate when I told him about my mum.

“Then he invited me to Manchester the following weekend and that was it really.

“He met my mum and dad on the Boxing Day, and Mum gave him her seal of approval straight away.”

Ever since, Elan has been Cindy’s “rock” and comforted her after her mum died in her family’s arms in June 2018, 20 months after being diagnosed with a glioblastoma.

Angela’s last words to Elan were, “Please don’t let me down.” He held her hand and promised her he wouldn’t.

And he has been true to his word.

“I wouldn’t have got through losing my mum without him,” said Cindy.

The loved-up couple moved into Elan’s Manchester flat together in January 2019, and he proposed that May.

He whisked Cindy off to a Lake District hotel for what she thought was a birthday treat. 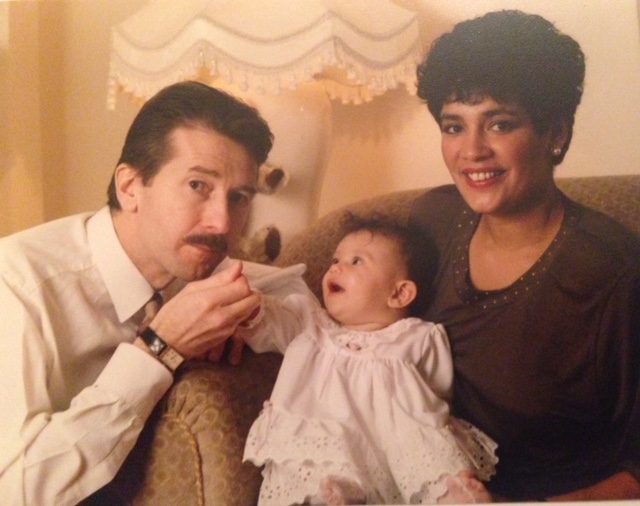 “It was always “when” not “if” we got married and had a family one day, but I didn’t have a clue!” said Cindy.

“He got down on one knee told me I’d made him the happiest he’d ever been,” she said.

“Then he said, ‘Will you marry me, Cindy Thompson?’

“I just couldn’t stop crying especially when he told me that he’d asked my dad’s permission to marry me and if he could modify my mum’s engagement ring for me.”

Then the sales manager, 30, showed Cindy a video with congratulations from First Dates staff. 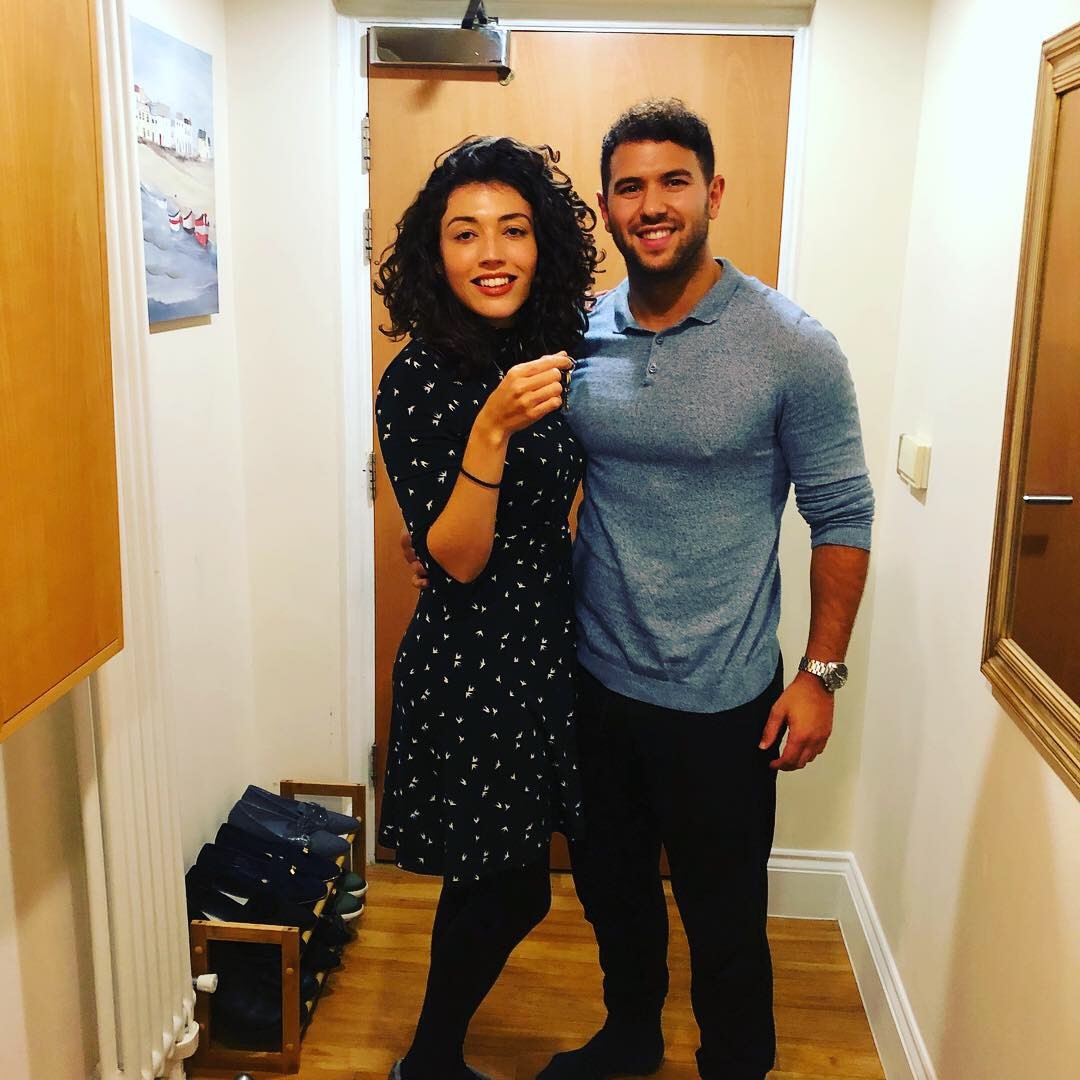 Cindy longed for her mum to still be here to shop for wedding dresses with her, but her mum’s best friend, Andrea, was at her side.

“I’d always imagined my mum being at my wedding and it was so hard seeing other women dress shopping with their mothers,” she said.

“But Andrea is like a second mum to me and she’s been such a fantastic support and help – nothing’s too much bother for her.

“We went to four shops and I tried on about 30 dresses, though I always knew what I had in mind.

“When I tried one on, the shop owner, Andrea and I all burst into tears – so we knew it was ‘the dress.’”

Cindy is keeping her dress under wraps for the big day – but “it’s definitely not khaki!”

I just couldn’t stop crying especially when he told me that he’d asked my dad’s permission to marry me and if he could modify my mum’s engagement ring for me.

“I’ve just got to make sure I’ll be able to fit into it!” said Cindy.

“I’d got rid of my muffin top as Elan and I had been hitting the gym since January to tone up.”

Poignantly, Cindy is going to use a rose from her mum’s wedding corsage from 1989 – still sprinkled with confetti – in her bouquet for the wedding’s blush pink and khaki colour scheme.

Although her day will be bitter-sweet not having her mum there, Erica will pay a tribute to her at the beginning of the ceremony.

‘I’m so grateful Mum met Elan and it gave her comfort knowing that I had met my soul mate,” said Cindy.

“During my First Dates interview, they asked what I thought of my mum and dad’s marriage. 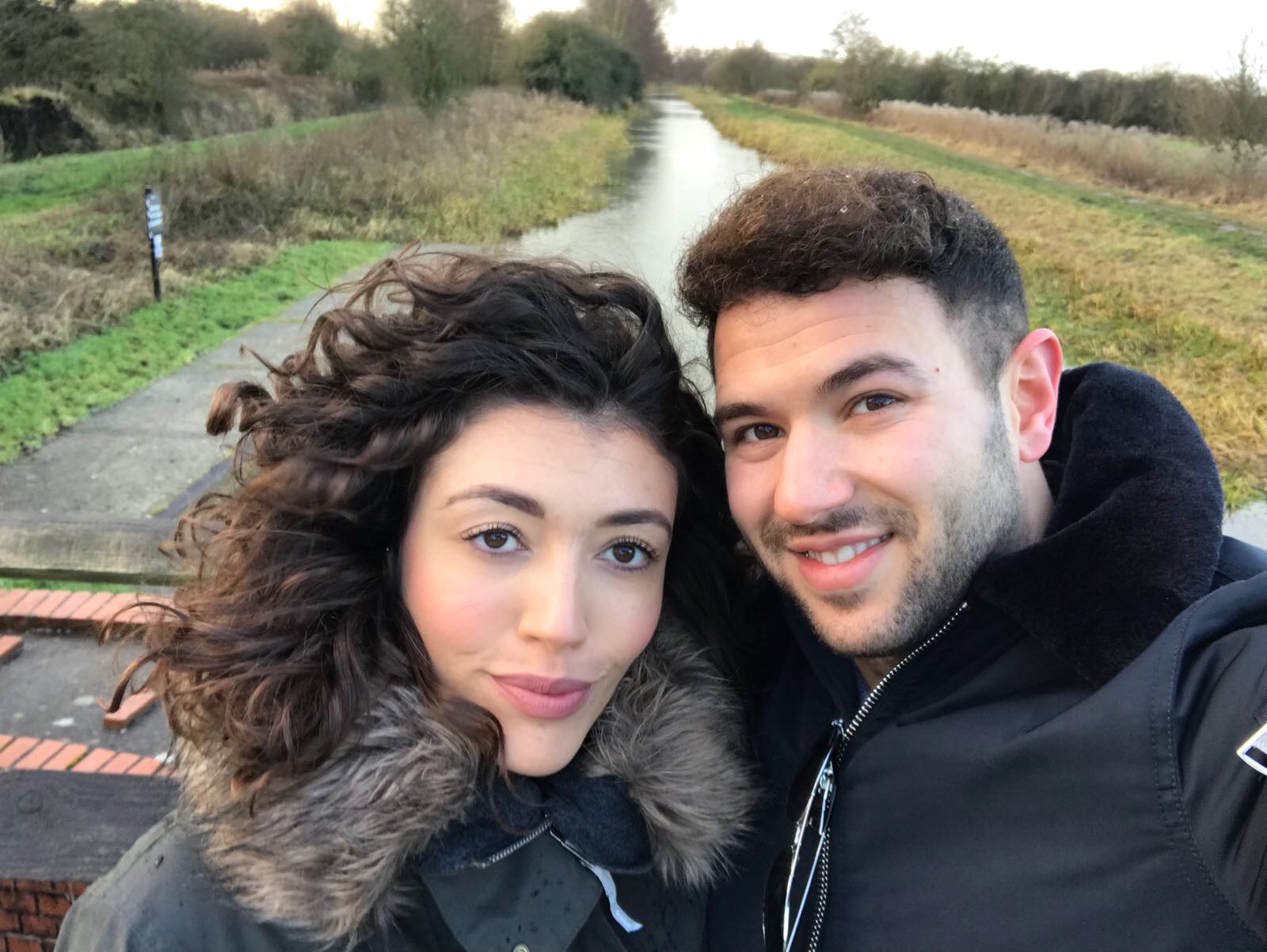 “I said how much I aspired to have a marriage like theirs’ one day – they had so much respect for each other.

“They were really close but had their own independence, too.

“And whatever life threw at them, they got through it together with such resilience.

“Most of all, I remember the laughter –they loved each other’s company and had such fun together.”

And Cindy’s mum had some marital advice for her daughter.

“The very last conversation I had with Mum about Elan, she said: “Be kind to each other.’

‘That’s become our mantra and we’re having it as part of our wedding vows.”

Now Cindy is sharing her story to help The Brain Tumour Charity raise awareness about the vital need for more research to save more lives.

“‘I am backing The Brain Tumour Charity’s work as their research is vital to find better treatments and one day a cure,” said Cindy. 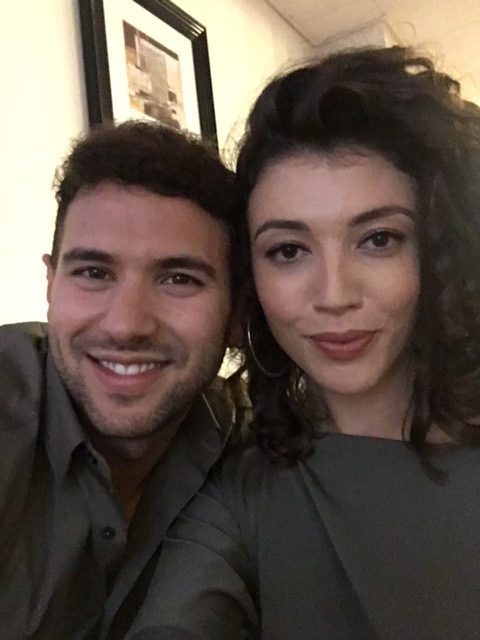 “From a fiercely independent, vibrant, intelligent woman, my mum became a shadow of her former self.”

And she praised the charity’s support for people during the Coronavirus crisis as they’re faced with cancelled scans and treatments.

“Having seen first-hand what Mum went through, my heart goes out to people having their treatment put on hold because of Coronavirus and added uncertainty at an already painful time,” she said.

Now Cindy is counting down the days until she finally ties the knot with Elan – and she knows her mum will be with her in spirit.

“I feel blessed to have had such a special mum and it’s a comfort that she had peace knowing I’d met my soul mate,” said Cindy.

“She taught us to live life to the full and I know she’d want us to be happy.”

And this mum explained the extreme lengths she’s going to to keep her teenage son inside during coronavirus lockdown.

Tags: capture, Couple, Dates, first, Who
You may also like
Recent Posts