Sheer black catsuits have become Britney Spears’ new favorite wardrobe item. She shimmied along to a Blackpink song in her sexy outfit.

Britney Spears‘ home fashion shows are officially back! After treating fans to a video featuring four fun and sexy wardrobe items on Apr. 7, the 39-year-old is modeling even more fresh looks in an Apr. 19 Instagram and Twitter video. Brit was really feeling herself, as she shimmied and danced along to Blackpink‘s “How You Like That.” Just like in her first video, Britney modeled a sultry sheer black catsuit, but this one came with what appeared to be a black bandeau bra and high waisted underwear underneath.

While the last sheer catsuit had a black leopard print pattern all over it, this one featured more abstract markings, but also had the same long sleeves and dark black neckline. Unlike in the last video where she wore her hair up, Brit let her long blonde locks flow as she again added black high heels to complete the look.

“I found my lace and leather catsuit this time….I’ve never worn it out anywhere cause well….where could I wear it but it’s fun to hang out in,” the singer noted in the caption, as she was standing on the balcony of her Thousand Oaks, CA estate. Brit added “Like I said before …. I’m bored !!!! Here’s to fashion.” In the last video, Britney noted in the caption, “I found my cat suit…No luck finding my mask but at least I found my body.” Britney obviously loves sheer catsuits, as she has at least two in her closet.

Just like in her fashion show video from two weeks ago, Brit would show off and outfit then toss with her arms to the next video and look. She began her Apr. 19 in an adorable yet sexy green mini-dress with red and white floral patterns on it. The frock featured a flirty ruffled hem and an open backside made up of a criss-crossing green string holding the garment together. 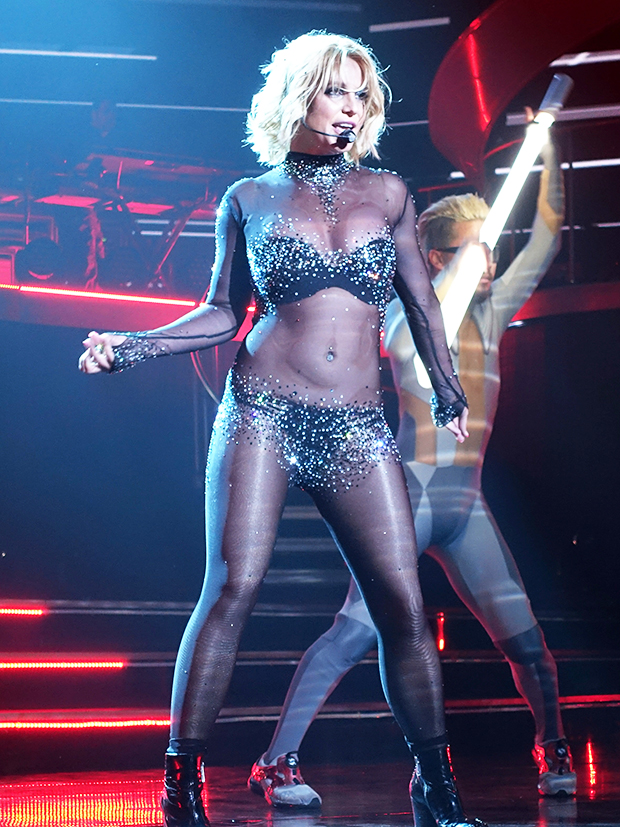 Britney then threw to her right and shimmied in the sexy catsuit. After showing off that look she tossed to video of her wearing a bright yellow bikini and looking absolutely fit and fabulous, not to mention so beach ready. Her final outfit was a knockout, even if she only showed it from behind. Britney could be seen in a tight black miniskirt, fuzzy pink sort sleeved jacket and white thigh-high stockings.

Fans went wild for the video, noting how she seemed so much more like her former playful self, not to mention going crazy that Britney is a fan of K-Pop’s superstar girl group Blackpink. Follower @j.aaronxo cheered, “SHE LOOKS BETTER” while @demiismywife commented, “she look so happy now, i’m glad to see that.” Fan houseofhoods observed, “Something has shifted. In a good way. Totally different vibe here and I’m here for it. You seem like YOU again.”

Other followers cheered on the “Toxic” singer’s good taste in music. Fan @jayyyjaegseun gushed, “OMG!!!!!!!! BRITNEY YOU STAN BLACKPINK!?!?! ICONIC” while dejaajones excitedly wrote, “USING A BLACKPINK SONG AHHH.” User @visionofcamila made the wish “Collab with BLACKPINK!” Well, Selena Gomez has already done a collab with Blackpink on the hit “Ice Cream,” so if Britney decides to inch back into finally making music again, a project with Blackpink would be an amazing place to start.

Tags: Britney Spears
You may also like
Recent Posts