President Joe Biden got lambasted on social media late last week when he turned up at a White House press conference wearing a tan cotton suit. The Twittersphere erupted with criticism over the single-breasted, three-button, notch-lapel suit that Biden paired with a patterned green tie to talk about the economy, the upbeat jobs report and the country’s vaccination status. The White House added fuel to the fire when communications director Kate Bedingfield said Biden discussed “subsTANtial job growth today” in his beige suit, which prompted journalists and observers to start posting comments and opinions IN CAPITAL LETTERS.

Most commentators drew parallels to a similarly colored suit that then-President Barack Obama wore in 2014 while taking on the issue of ISIS in the Middle East. That wardrobe choice became a national drama at the time, with congressmen and reporters saying it was unpresidential and showed a lack of seriousness. (Of course, Obama is now facing controversy of his own after a 60th birthday bash on Martha’s Vineyard this past weekend that drew criticism for its unmasked guests dancing the night away in the midst of a pandemic.)

The debate over what constitutes “presidential” dress stretches back, well, centuries. But the criticism of Biden, and before him Obama, mirrors the days of when Ronald Reagan turned up at a press conference wearing — gasp — a brown suit.

The Cape Makes A Return On The Runway

But while social media was aghast that Biden would don such a color — in Washington in August when the temperature was 90 degrees and humid — the men’s wear community was a lot more forgiving. 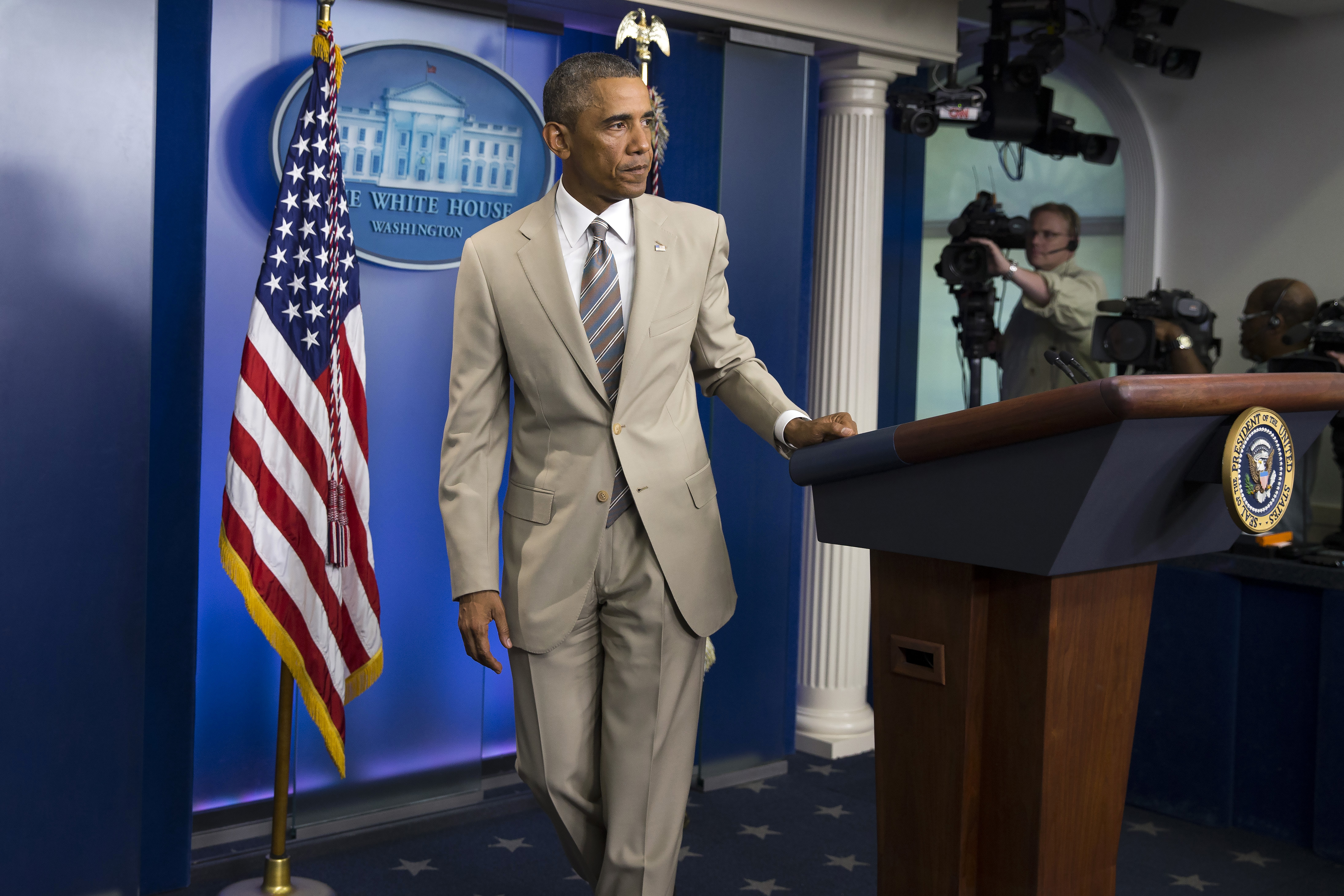 President Barack Obama took a lot of heat about his choice to wear a tan suit in 2014. AP Photo/Evan Vucci

This being 2021, when joggers and half-zips have become the work wardrobe of choice for a lot of men (if not a dress shirt and pajama bottoms while on Zoom calls), designers and brands were unfazed by the president’s sartorial choice. And while there was some discussion about the fit of the suit, its color was no big deal to most.

Kenneth Cole said, “I’m all about freedom of expression. If Biden can find his voice and express it in his wardrobe choices, then I salute it and encourage it. I don’t think anybody would question that it’s more appropriate than [Vladimir] Putin being bare-chested on top of his horse. Everybody in this post-COVID-19 world is going to figure out what makes sense [for them]. How you dress is a personal form of expression and to take that away from somebody I don’t think is appropriate.”

In its 200-plus-year history, Brooks Brothers has dressed nearly every American president. And while most of them have opted for the more traditional — and widely accepted — dark suits, its current creative director has no issues with the current commander in chief’s choice to go light.

“President Biden has a very classic all-American style in that he is always well dressed for any occasion,” said Michael Bastian. “A khaki suit is seasonally appropriate — and he’s certainly not the first to wear one.”

Todd Snyder was also on board with the president’s choice, but did question the styling: “I think the tan suit is perfectly acceptable and very American. It’s refreshing to see a president take some risks in dressing, but he missed on the fit and should have left the top button undone,” he said.

“He is relevant to the times, nobody cares about the old uniform anymore — not for the president or the man on the street,” she said. “We’re in a time of evolution in tailored clothing. We want him to wear a good looking suit, and the color doesn’t matter. It’s not like he was wearing a bomber jacket and jeans at the podium — people are overreacting. To me the tan suit is a sign of optimism, of looking forward. He’s worn a lot of Hickey Freeman in the past and I would invite him to come see me for an updated silhouette.”

Not surprisingly, Ann Richardson, chief archivist for Williamson-Dickie, a leader in khaki and workwear, didn’t object to the suit either. “All shades of brown are trending,” she said. “Plus, he’s in a warm area and it’s summer, so why not? You can’t really wear a wool-blend in Washington, D.C., in August. I think it’s great.”

Jack Carlson, founder of Rowing Blazers, the preppy-inspired brand, gave a thumbs-up to Biden’s choice and drew parallels to the U.K. “It’s very presidential — and it’s a clear homage to President Obama,” he said. “But the tan suit shouldn’t be controversial. If it’s good enough for Prince Charles, the heir apparent to the British throne, it should be good enough for our commander in chief. In the United States, the president is both head of government and head of state. In the U.K., for example, the prime minister is the head of government, while the queen or king at the time is the head of state. The tan suit is more of a head of state vibe — hence the comparison to Prince Charles. I think a prime minister would have a much tougher time pulling off a tan suit. For the president of the United States, it works.

“Granted, I think Prince Charles’ tailoring is a bit nicer, but it’s cool to see President Biden opting for a three-button suit,” Carlson added. “The rule about which buttons to fasten on a three-button suit is ‘sometimes-always-never,’ unless you’re JFK. President Biden chose to button that top button, but I find a ‘three-roll-two’ to be more flattering. This is when the wearer only fastens the middle button, and the top button rolls open, without a crease in the lapel. But this is nitpicking. He looks great.”

Joseph Abboud had more of an issue with the fit. “A politician’s suit should never walk into a room before he does,” he said, pointing to former California Gov. Jerry Brown’s famous double-breasted suits as an example. Abboud said Biden’s suit was “ill-fitting,” and looked like something that had been in his closet since the Obama administration. “It was too long and looked old,” Abboud said. “He generally dresses better than that. Obama got reamed when he wore a tan suit, but at least it fit him well.”

But Abboud said that the color choice wasn’t too surprising. “It’s part of that old Southeast, Baltimore, Ivy League style from the ’50s and ’60s. It’s always warm down there [in Washington]. But it doesn’t exude power — navy may be boring, but it performs.”

Custom tailor Alan Flusser, also weighed in: “A well-cut tan suit is always appropriate in summer, especially if worn around a golf course or for traveling, as Obama did. Yes, not as dressy as other dark suits but always appropriate and stylish if cut well. Blue shirt, navy/gold repp stripe tie, white pocket hankie and presto, elegant as ever.”

Joe Ellis, American historian and Pulitzer Prize-winning author, was all for the president’s suit choice. “His normal wardrobe is D.C. conservative and he’s making a statement. It’s summer and he looked good.”

He said the fact that Obama garnered criticism for wearing a tan suit was more about racism than fashion. “He got criticized for many things,” Ellis said. “People felt uncomfortable having a person who looked like Obama as president.”

Actually, criticism of presidential wardrobes go back almost to the beginning of our nation. Ellis said Thomas Jefferson scandalously wore his riding clothes — complete with pantaloons and boots — to a formal dinner, evoking horrified reactions from guests.

“When you’re president, you’re naturally a target for all kinds of commentary,” Ellis said. “Biden should hope they keep talking about his suit and not the infrastructure bill. The suit is a deflection mechanism.”

Presidential historian and author Lindsay Chervinsky doesn’t really see what all the hoopla is about. “Presidents used to wear tan pretty regularly, in the summer especially, but it wasn’t until Obama was in office that right-wing press and Republicans made a fuss,” she said. “President Reagan was particularly fond of tan suits. To be sure, we are no less divided as a nation than we were during Obama’s administration, but I think that Biden can get away with the tan suit for two reasons. First, Fox News and Republicans have had a harder time criticizing Biden. Maybe because he’s been in politics for so long, or because as an old white man, he’s less threatening. Second, there are so many other crises that it’s hard to get that criticism to stick.”

While Biden and his wife, First Lady Jill Biden, have refrained from talking about their fashion choices, we at least know one old maxim Biden doesn’t adhere to: When in town, don’t wear brown.